Poll Latest -
Tories ahead by 9%

The most recent MORI poll published in the Observer this weekend puts the Conservatives ahead by 9%.

The really good news is not this poll (which I think looks on the hight side) but that MORI is the last of the big polling organisations to publish a poll that now shows the Conservatives in the lead.

Although we have had small poll leads on past occasions the last time all the main polling firms gave us a consistant lead over Labour like this was in 1989.

Nobody is getting too excited, because even if these numbers were sustained for the four years until the next election they would still not translate into an overall Conservative majority, which might be one reason that David Cameron is appealing to Liberal Democrats for support.

Believe it or not in order to wrestle control of the House of Commons the Conservatives would need about 44% of the vote with Labour on less than 31% and the Lib Dems below 20%. Exact figures are hard because much depends on tactical voting and the effective campaigns in target seats like Torbay.

But the polling numbers support the anecdotal evidence all around us which is that sentiment is moving our way and that momentum for change is growing.
11 comments:

If Kennedy goes will this be good news or bad news for local Lib Dems in Torbay?

A week is a long time in politics, it hardly seems possible that just a few weeks ago my party was leaderless and drifting while the Lib Dems confidently predicted replacing the Conservatives as the major opposition party.

One way ot another Kennedy looks like damaged goods having been apparently described by Ming Campbell -his own deputy- as 'holed below the waterline' it must only be a question of when he goes, not if he goes.

Could this be a lifeline for Bay Lib Dems? Famously Kennedy refused to take sides over the whole question of the councillors allowances leaving some in his local party stranded and causing a very great deal of bad feeling and concern amongst local Liberals.

Could a new leader represent a 'clean start' for the Bays Lib Dems and give them an opportunity to dump many of the councillors they now so revile?

On the other hand is there a danger that a leaderhip contest could cause a damaging split between those traditional Liberals who are to the right of the party who want to continue to challenge the Tories head-on, and the mainstream Lib Dems who are desperate to take up the vacant space to the left of Tony Blair and try to pick up support from disillusioned socialist and old-Labour supporters in seats like Torbay; but more importantly in dozens of Labour held seats where the Lib dems are now the main challengers?

It will be a make or break decision for the Lib Dems which those of us in the Conservative party will be watching very closely.
11 comments: 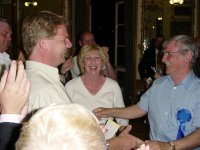 That was the week that was.

Another week -another By Election victory.

Political weeks just don't come much better than this one. This picture is me congratulating Kevin Carroll on his by election win just a year or so ago. His was the first of a string of wins that have seen the balance of power shift in Torbay forever, topped by our big result on Thursday. But what a week for the Party!

Monday - Torbay Conservatives hold an executive council meeting (the executive is the main decision making body of the local association) and agree virtually unanimously to ask the Party Chairman in London to allow them to re-adopt me on a fast-track basis. Considering how much I have been rocking the local Troy boat lately this is both encouraging for me, proof that the local party wants to change, and worrying for our political opponents.

Tuesday - Cameron wins an overwhelming vote from members beating even my forecast of two-to-one and then goes on to remind us why we voted for him by an astonishingly upbeat launch speech.

Wednesday - Question time comes and goes and Cameron proves he can rise to the challenge yet again, both by performing well ('I've only being doing this job 5 minutes Prime Minister, and already you're asking me the questions....')

Thursday - Churston By election sees over 70% of local voters choosing our man over the Lib Dem opponent - a stunning turnaround on 2003 when we narrowly won one of the seats by two votes.

Friday - A shadow cabinet line-up that includes the great, the good and the plain popular and, better still, no arguments - everyone seems happy.

Saturday - A YOUGOV poll this weekend shows a 1% lead for the Conservatives over Labour and a catastrophic 5% drop in Lib Dem support down from 23% at the election to just 18% now.

Before anyone else says it we are clearly in a honeymoon period, I won't be truly satisfied that we have turned the corner for a few months yet, by about June.

Rumours continue to circulate that the Lib Dems have had it with Charles Kennedy, so by then we may be in the middle of a Lib Dem leadership battle.

Will theirs help them as much as ours has helped us?
25 comments:

This is the start of a watershed week for the Conservatives locally and nationally.

Tonight the local association are having an executive meeting to decide amongst other things whether or not to re-appoint me as the PPC.


The selection process is organised at association level, locally autononmy is still sacrosanct in the Tory party, fortunately.

As reported slightly sensationally by the Herald Express last Monday I have been invited to apply for a couple of other seats coming up for selection which would be interesting to me if the local Association were to decide they would prefer to try someone else to contest Torbay on their behalf.

There is no doubt that my style of operation (and indeed my style of dress) is not to the taste of some members of the local party who I think would prefer a candidate more in the mould of Conservative MP's of old, whereas there are others who like the fact that I am anything but an 'old style' Tory.

It is for the local association members to decide what they want, and who they believe will give them the best chance in four or five years time.

Not unreasonably I have asked the local association to make an early decision so far as I am concerned and to my delight they have responded and will make a judgement tonight.

And then tomorrow we will find out (at last) who is to be our new leader. I am convinced that Cameron has it and by a convincing majority (I expect nearly 2-1 in Camerons favour).

And then on Thursday we have a pivotal local by election in Torbay to select a replacement for Nick Bye in Churston.

This is going to be interesting because there is a large UKIP contingent in that area -UKIP are not contesting the ward and we will be interested to see if their vote comes out, and if it does, whether it comes out for our man.
13 comments: