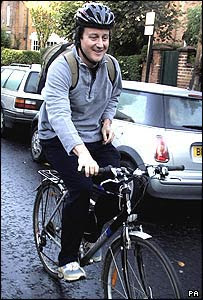 Will the cycling story be good or bad for Cameron?

The Mirror have run a story that David Cameron has ridden his bike through a red light, and down a one-way-street the wrong way on his regular cycle ride from his home in Notting Hill to the Houses of Parliament.

They followed him using a reporter on another bike and video recorded his journeys over three weeks, Mr Cameron apparently likes to ride to the 'office' at least once a week if his schedule permits it.

Their story was intended to damage the future Prime Minister (The Mirror is a strongly Labour supporting paper) but the fact that they and their Labour friends imagined it would harm him says more about how off the mark they have become than about Mr Camerons fitness for office.

The story is a big boost for David Cameron indeed, if it had been anyone but the Mirror publishing it I would probably have guessed this story was a plant by Camerons new press guru Andy Coulson.

Reminding people that he still regularly cycles to work is yet more proof that he is a regular guy not subverted by the trappings of power and status.

And as for jumping a red light on a push bike (in London) - well lets see - but I think the public will rate it as making him normal, not criminal.

I note two things, even the BBC highlighted how 'one minute he is cycling to work, the next he is meeting world leaders' and Cameron was heavily defended by cycling campaign group CTC.

"It shows what an ass cycling regulation [and] traffic management is in this country at the moment... we campaign in CTC for things like opening up one-way streets, which are allowed all over Europe,"

"[Mr Cameron] is a yard in front of the white line in front of the Houses of Parliament - frankly, that's where I'd go to get away from the cars, he was hardly jumping the light" .

You can watch the video here:

A series of polls have given all of us Tories a huge boost to already very high morale in the party.

On Sunday there was a Yougov poll in the Sunday Times that showed us at our best level of support against Labour since the days of Micheal Foot in 1983; with a 16% lead over Labour. ICM in the News of the World followed with a poll that showed our support up 6% on a month earlier and now the March ICM poll for the Guardian, which has just been published, gives the following shares - CON 42% (+2): LAB 29% (-2): LD 21% (+1).

If these figures are reproduced at the next General Election the Tories will win with a 60 seat majority.

All pollsters warn that one poll is not enough to reveal a change in sentiment but equally all agree that several that say the same do.

So it is clear that far from putting a stop to the rot of Gordon Browns Government the budget has made the Labour Party as unpopular today as it was in 1983 when their radical anti nuclear pro-nationalisation election manifesto was described by a shadow cabinet minister as "the longest suicide note in history".

And the Lib Dems must be relieved that their support seems to be holding firm against Labour, too. After a rocky patch leading up to Nick Cleggs election Lib Dem support sagged below the psychologically important 16% level but in these three polls they have bounced back to near their 2005 election total.
1 comment:

The Liberal Democrats bizarre decision not to vote either way over the EU treaty yesterday has refined sitting on the fence into an art form. For Nick Clegg -in his first big decision- to demand that his MP's sit on their hands on pain of resignation is simply breathtaking stupidity, especially at a time when many people are wondering just what exactly our Lib Dem MP actually does for the money he and his wife are paid.

Adrian Sanders position is especially ludicrous, this is the man who has never accepted our mayoral system (adopted fair and square after a referendum); refuses to offer us a referendum on probably the most import decision faced by Britain since he became MP, yet claims there is a 'need' for a referendum on whether Torbay has one casino or two.

In eleven years at Westminster our MP has achieved nothing for the people of Torbay. I am afraid that last week was the shameful pinnacle of an utterly ineffectual political career.

In order to get elected here in 2005 Mr Sanders solemnly promised voters that he would back a referendum and has blatantly reneged on that promise, something that at almost a quarter of his rather more honourable colleagues felt they couldn't do. He already holds the accolade for having polled the lowest vote of any MP in Torbays history, and I don't doubt that the dwindling numbers of people voting Lib Dem in Torbay will shrink further as a result of this week; but the real damage is not just to Adrians chances of ever being trusted again, it is that even fewer people will see the point in turning out to vote at all.