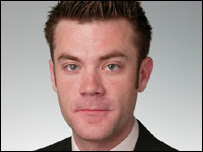 The gentleman pictured above is Richard Porter, who fought Camberwell and Peckham for the Lib Dems at the last General Election and who has joined the Conservative Party over the Christmas break; along with colleagues John Barstow, who stood at Tonbridge and Malling, and Tariq Mahmood, a physician who contested Uxbridge.

"Mr Porter is a gay rights campaigner who wrote the Liberal Democrat manifesto for the lesbian, gay, bisexual and transgender community in the 2005 general election.

He described Lib Dem leader Menzies Campbell as a "has-been" who had put the party "in reverse gear".

He said his personal beliefs were no longer best represented by the Lib Dems, but by the Conservatives.

John Barstow, a union steward, said his former party were "bland, formulaic and out of touch with real life".

They were Adrian Childs in West Suffolk; Jeff Clarke, in Wirral West; and Rene Kinsett in Swansea West, plus the former Labour candidate for Horsham, Rehman Chishti. "

People have heard the talk, they have listened to David Cameron promise to make our party more inclusive and adopt a 21st century political agenda but I recognise that people need to see more than words. Herre we have yet more proof that change is real, and permanent.

The Conservative Party are serious about broadening our appeal and reaching out to a far wider section of the community for our support. The fact that so many senior political activists from our opponents- people who were right at the front line of the last General Election- have seen enough to give us this vote of confidence is very good news indeed.

Is yet another round of in-fighting coming?

This mornings Communicate Research poll for the Independent newspaper has the Lib Dems down on just 14% and follows the YouGov poll that was in the Sunday Times at the weekend and had the Lib Dems at 15%.

With all the usual caveats about opinion polls a pattern has emerged. In December all of the main polling organisations showed figures representing a significant and sustained fall in support.

This is against their showing at the last GE with Kennedy still at the helm of over 22% - a quarter of Lib Dems appear to have deserted the party since Ming Campbell took over as leader.

What might provoke another round of jostling in the Parliamentary Lib Dem party is the bald fact that at this level of support as many as half the Lib Dem MP's currently in Westminster could be at risk of losing their seats (and, of course, their livlihoods), indeed according to Martin Baxters 'Electoral calculus' website such a result would leave the Lib Dems back where they were in the 1970's -down to just a rump of half a dozen MP's.

While no-one in Westminster belives the result likely to be that bad, there is nothing more potent to brew serious dissent in a political party than the prospect of losing.

I expect it to be a long cold winter for Menzies Campbell; and a bad result nationally for the Lib Dems in next Mays local elections could see a fresh challenge for his job.
1 comment:

I am sorry for the lack of updates but due to technical problems I have not been able to access the blog recently.

Alls well today though.
No comments:

Sorry for the lack of updates, due to technical difficulties I have been offline for nearly a fortnight.
No comments:

What do we do about street Prostitution?

One of the interesting and possibly positive side effects from the horror story in Ipswich is the dialogue and debate about the legal status of prostitutes.

The soft underbelly of Britain today is occasionally exposed to public gaze and this case is one such time when ordinary members of the public have to face the reality that -even in a secondary town like Ipswich- there can be hundreds of girls out on the streets in danger every week.

Why do they do it? What makes perfectly sensible people risk their lives to make their living in this way? Risking not just violent abuse but sexual diseases, arrest and imprisonment, and complete social exclusion?

In a word, hard drugs.

Estimates vary, but around 70% of prostitutes are thought to be drug addicts and most of those are the street girls who face the biggest danger.

Should we legalise prostitution? Well I do believe those who argue that the current legislation works against those most vulnerable by outlawing brothels and forcing more girls to streetwalk but otherwise I am not convinced that their legal status is the problem.

The issue, like so many others today, comes back to drug addiction.

Unless and until we can bring ourselves to accept that blanket prohibition simply acts an an incentive for criminality - addicts push hard drugs to others to finance their habit in a kind of pyramid selling scheme- we can never begin to tackle the problem properly.

Sure, a massive increase in rehab schemes as we propose will help, but will it solve the problem?- I don't think so.
3 comments:

The truth: Families are vital

I am relieved and pleased that Iain Duncan-Smith has put the question of the status of the family at centre stage in our review of social policy.

Left to it's own devices the breakdown of the family unit threatens the cohesion of society.

While it is not the job of Government to decree how people should choose to live their lives policymakers do have to recognise the impact of their decisions on social behaviour. As a result of years of neglect for the status of marriage it is hardly surprising that fewer people are choosing to marry; and even less surprising that fewer and fewer people are seeing the benefits of having children within a stable married relationship if the law offers extra benefits to those who don't.

Mr Duncan Smith says that marriage has been undermined by the tax and benefits system under the current Labour government; well he is partly right - we didn't do that much to support marriage ourselves when we last had the chance; so it's a cross party issue that has been a problem for a long time.

He says that the current report is about finding out what the problems are and what has gone wrong - not to lecture people to get married - but to help couples, married and unmarried, to stabilise their relationships.

I agree. We could start by promising a tax regime that recognises the status of families and introduce a transferable married allowance.

We should also have another look at the way the law works with regard to separated parent and their relationships with their children.

I still think ithere are many absentee dads who get off their responsibilities too easily whilst others -who do want to be involved in their childrens upbringing - often find themselves banned by law from having any involvement save paying maintenance.

Are we overdeveloped enough already?

There has been a huge fuss all week after the Council officers responsible for planning strategy issued a document identifying 'preferred' land for 800 new homes along the Yalberton valley. Unfortunately this document had not yet been seen by any of the elected representatives (from any party) who will in fact make the decision.

An apology for this has been quickly given by the Council officers concerned but not before a great deal of stress and alarm has been caused to residents and businesses nearby.

Firstly, there is no way this proposal is going to get anywhere without a full and open public debate and if the level of public hostility demonstrated to far is continued I suspect this proposal will wither quite rapidly.

But the central issue remains, the council is under huge pressure from the Government to find room for several thousand new homes over the next 20 years and there just isn't going to be enough brown land available. There is pressure to build more homes here and in Newton Abbot while protecting most of the South Hams from much development and Dartmoor National Park from any at all.

My view is that while we need new homes, and new homes that people want, there is a limit to how much land can be found in Torbay Borough to build on.

The answer to me is obvious.

The Kingskerswell bypass, if given the go-ahead, will throw up parcels of unviable agricultural land all round it which could easily provide the escape-valve for pressure for building land; in addition to the brownfield sites we already know about.

That is the right place to look for new space to develop; not the unspoiled countryside that we so need to protect.