What will the story be this Thursday?

In the 2007 local elections my party beat all predictions to the number of gains we would make, breaking records and sealing our gains in 2006.

Local elections are a crucial real-world test of public opinion and at a time when polls have been showing a sharp jump inTory support and a falling back of interest in the other two parties it is very useful to be able to back up the pollsters with actual voting results.

Needless to say speculation is running high that thursday will be a bloodbath for Labour, with talk of vote shares in the low '20s and results matching their worst ever in 1968 but my view is that things might not be that bloody for Labour on the night.

Partly this is because in many of the places we are in with a shout of winning we have hardly any serious campaigning power; in some northern city suberbs we have barely a skeleton network of grass roots activists, and local Government is not inspiring a new generation of activists either, they will work for 'Dave' at the next GE but leafletting over council bin collections is not what they want to do these days.

Then there is the fact that I think the Liberal Democrats have at last recognised that their best chance of survival lies not in continually tying up resources attemptiong to unseat Tory councillors in the South but in picking low hanging fruit in the North - and accordingly I do expect them to have something to celebrate on Friday morning (although as my previous post alludes to, not in the London Mayoral contest where I think they are in for a drubbing).

How well will we actually do? I hope three figure gains - 100 would be enough for me; but not as well as the papers want. I am expecting 'Tories disappointed' headlines on Friday and over the weekend presaging a let-up of the negative pressure on Brwon for the time being.

Fun to speculate, not long to wait.
No comments:

Who is this man?


Answers on a postcard:

Comrade Brown and I both fail to conquor America ...


Rumours that I have been spying on Gordon Browns trip to the USA are wide of the mark. I have indeed been enjoying the Florida sunshine (but not the endless queing for theme-park rides with my children) but my trip was strictly R&R.

In contrast to the breathless manner in which the BBC have been covering the possibility of a woman ot a black man reaching the White House, very little news about politics seems to reach the media in America.

Worse news still for Gordon Brown is that his visit here was only mentioned once in any media that I saw or heard on two weeks; and then in the context of an apparent possibility that he might be ousted in a coup by disgruntled Labour MP's if his poll ratings haven’t improved by the autumn. I take much of what I read and hear in the newspapers with a pinch of salt at the best of times but this daft story surely wasn’t being reported in ... was it?

Curiosity got the better of me and by my second-to-last night I couldn't resist the temptation to take a sneaky peak at Politicalbetting.com where, sure enough, a book has been opened on the probability of someone else leading Labour into the next election.

It's all too predictable for the press, bored with the lack of news on the politics front, to make a story where there isn't one; I just don't believe that the Labour party have the guts or the organisation to even contemplate such a move and in any case their constitution makes removing a sitting PM almost impossible.

Which means the rumor must be based on the premise that Brown will 'do the decent thing' and fall on his sword; if asked to by his peers. If he ever believed that the best interests of the Labour movement would be served by stepping aside I suspect he just might consider it; but I cannot imagine that he would ever be so self-aware.

Gordon Brown suffers from the worst kind of arrogance: he believes his work is his purpose - his divine destiny- even more than Tony Blair did. I do believe the stories that Brown is not enjoying being PM; I don't doubt he finds the intrusive nature of the job difficult and utterly despises having his personality and character endlessly picked over by commentators (like me...) who he believes to be immeasurably inferior to him.

In fact the more the job is a trial, the harder he finds it, the more he will believe that it is the ‘right’ thing for him to be doing.

He may well be indecisive, mendacious and paranoid but he isn't a quitter. For some Labour insiders to hope otherwise shows a complete lack of understanding for the personality of their leader.

Good or bad they are stuck with him. Like most voters in England, America failed to appreciate Gordons greatness. In fact they failed to notice him at all.

Perhaps Lord Desai is right when he says 'Gordon Brown was put on this earth to remind everyone how good Tony Blair was." 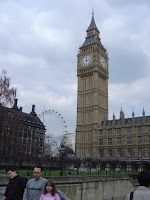 There have been consistent problems with some MP's claims in all three categories. Early on under the new scheme several Labour MP's got into trouble for claiming the costs of offices that it turned out their political parties were using (all costs are not supposed to be for political campaigning, only dealing with constituents) and numerous MP's including our own have found themselves under very close scrutiny for employing family members in their parliamentary or constituency office.

Then there has been the concerns over using both the new £10,000 'communications allowance' and the annual report to promote MP's and boost their chances of re-election. Conservatives have promised to abolish the communications allowance if elected and the annual report rules will be tightened up to ensure that each MP publishes to an approved format.

The third area is probably the one that causes the most concern. Nearly all MP's are able to claim what is a tax free housing allowance that is around £2,000 a month and most of them take the view that it's a ligitimate part of their 'pay'. But MP's who had a London home already, or who get one for free, found that they couldn't claim mortgage or rent which seemd unfair; so the HOC authorities settled on a scheme whereby other 'costs' could be claimed instead, which is where the infamous John Lewis List comes in. MP's simply ensured that they claimed the money they felt they were 'entitled to' for other things that were 'essential costs incurred in connection with maintaining a second home' that added up to the allowance total.

Frankly the system is nonsense. In industry and in the civil service their are lots of cases where employees need to be based in two places, or need to maintain two homes; and very rarely would an employer start some stupid scheme like this.

What should happen is that MP's salaries should reflect the costs of the job more accurately and MP's should then pay for their own accommodation from their own pocket. If one MP wants to live in a caravan and then save for retirement while another wants to fork out for a flat screen TV and a flat in Canary Wharf then it should be their own business and no-one else's.

The political drawback, of course, is that to maintain the lifestyle to which MP's have become accustomed you would have to increase their salary by a lot more than the £20,000 housing allowance because it is tax free. You would be looking at a basic salary for MP's of about £100,000 and the headlines would be screaming "MP's award themselves a 65% payrise".

And we all remember what happens to elected representatives who award themselves 65% increases, don't we?

So in spite of promises by MP's for reform of the system I expect another fudge on the question of MP's housing allowances this summer, and more revelations and political damage next Autumn as a result.

Blog Updates: I am on holiday for a fortnight from this weekend.
2 comments: 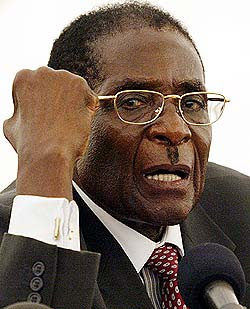 A new era for Africa?

The latest rumours leaking out from Harare today suggest that the actual election results from the Zimbabwe elections at the weekend are about 60% MDC in the Parliament and 55% Tsvangerai 40% Mugabe in the Presidential.


The bogosphere is alive with stories of Generals refusing to support the man who put them there, fearing that the level of opposition is just too high.

Apparently, although hotly denied officially, South Africans are in Harare trying to negotiate some kind of a settlement for Mugabe to leave peacefully on his own terms.

This is an intersting story with the potential to make a massive difference to the entire continent of Africa.

Firstly, if as we all hope and pray, the Mugabe regime ends relatively peacefully this will have been the second occasion this year that genuine democratic change has occurred in previous trouble spots in Africa without resorting to a major civil war (East Africa was the first) and secondly, it will prove that African nations can work together to support the peoples of each nation on the continenent, because on both occasions change will have been brought about for Africans, by Africans without any interference of outsiders.
One of the primary ingredients for economic growth and prosperity for any nation is investment and in the modern world that means encouraging international business and global investors.

Those investors require punitive returns bordering on exploitation in order to risk their money in regions and countries controlled on the whim of a dictator or where the rule of law is absent.

But in contrast, in African countries where the rule of law and a free democracy is proven to be established - and especially where it has been tested and found resiliant- external investment has flourished, the length of term for investors has extended massively and most important the level of return needed to attract their money has diminished, leaving more in the productive economy and creating wealth there.

So the implications o a relatively peaceful handover of power from Mugabe to someone else run much wider than just Zimbabwe, the whole continent of Africa could benefit.

It's a bit early to tell, and we may yet be disappointed, but Africa could be on the threshold of a major new era of stability, peace and growing prosperity.

Update April 4th - sadly the latest news coming from Harare is much less promising that when I wrote this. I will post again as and when we know what is actually going to happen.
No comments: