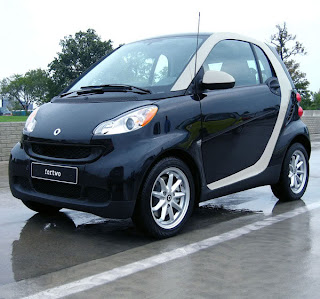 We are making cars more efficient, but what about houses?

I have been chugging round in my Smart Diesel for a few days now.

My previous carriage of choice was twice as long and had an engine five times as big.

It is definitely not as luxurious as my petrol Mercedes was, but in all other ways it is a lot less of a compromise than I was expecting.

For one thing it is amazingly comfortable on long trips - just been to London and back - and I found the seats fine. Being a turbo diesel means it has a lot more urge than Karen's Daihatsu on the motorway - and it is quiet.

The biggest incentive was at the pumps. A return trip in the Mercedes was never less than £90 in fuel and about another £100 in maintenance and wear and tear. The trip in the Smart cost £30, about half the cost of going on the train.

I am not a convert to the global warming theory and remain a sceptic about the evidence that mans activity is causing the planet to warm up.

But in many ways whether there really is global warming or not is irrelevant; the balance of probability says we should try and be more fuel efficient. If the climate scientists are right then it will help prevent warming, and if they are wrong it will preserve our natural resources for future generations. This is a win-win.

If each of us tries to do something less harmful then there is no obvious downside and there could be a benefit for future generations.

The main plus of the public concern about the environment so far is a change in perceptions, turning up for an important business meeting in a small car like a Smart, or a Fiat 500 would until very recently have been seen as at best eccentric, and at worst as a career-damaging move whereas now it is seen as reflecting a responsible attitude.

What a pity that the realism in the business community that means my Smart is now seen as a perfectly acceptable form of transport for a senior executive has not spread to the world of Government Planning Inspectors and English Heritage.

Carbon dioxide emissions from the housing sector account for 27 per cent of the UK's carbon footprint while passenger cars account for only about 12%. There are 375,000 listed buildings in the UK of which 92% are the least important Grade 2 type, all of which are stuck in a 100 year old time warp and excluded from much new building material technology.

Take for example our home in Torquay. It is Grade 2 listed and under current legislation we cannot replace

wooden sash windows and doors with more thermally efficient modern replicas even if they are indistinguishable to look at from the originals. We could not take advantage of the South facing aspect of the house to fit solar panels nor could we have a wind generator on the roof even though they would be invisible from the road. In fact after already fitting a condensing boiler and a lot of loft insulation there is little we can do to improve our homes thermal rating.

This is a classic case of a lack of 'joined up' thinking in Government, where one department sets rules and laws that directly conflict with another. On the one hand we want more efficient homes yet we actively prevent homeowners from making desirable improvements to bring their houses up to date, thermally speaking.

I agree that classic buildings need protecting from inappropriate modernisation but we should modify the listed buildings legislation to encourage thermal and efficiency improvements when new technology allows it to blend in, or when it is hidden.

The Georgians, Victorians and Edwardians made great buildings by embracing new building materials and technologies. What would they have made of our modern obsession with keeping thousands of buildings inefficient and wasteful - all in the name of purity?
No comments:

Just how much is the Government Borrowing?

The sheer scale of National borrowing it so utterly enormous it is hard to comprehend.

Understanding clearly the enormous difference between a billion here and a trillion there is almost impossible to do; so I thought I would borrow an excellent illustration from an American site (http://www.dailycognition.com/) which tries to show just how much space this kind of money would take up if it was piled up in cash.

These illustrations are based on tightly packed brand new $100 bills, and of course the biggest note we have is only £50 so at current exchange rates the amount stacked if it was in in sterling amounts the same would look half as big again.

Packed tight in bundles it would fit on a single pallet. Cliff Richard is worth about £60m. It is about enough to build half the Kingskerswell bypass, buy two Eurofighter jets, pick up a second-hand Boeing 747 or completely rebuild a city centre shopping mall.

Torbay council spend this much annually on running all the schools in Torbay.

It's half a lorry full of money.

Very few individuals have this much worth: Richard Branson, maybe Sir Paul McCartney.

For £600m you could buy the famous Gerkhin building in the City of London, or build a second Wembley Stadium.

Torbay Council spends this much over the four years of it's electoral cycle. It is what the Government will be paying out every week on interest on the national debt next year and beyond.

The man in the red shirt is shown for scale again, but you can hardly see him down in the bottom left-hand corner, the pallets are stacked two high and yet still the picture can hardly fit on my blog. This amount is - roughly - the same as the current national debt figure of £730,000,000,000 shown on my debt counter above.

According to projections in the Budget, public sector net debt, the accumulated stock of outstanding Government borrowing, will reach £1.37 trillion in 2013/14. This is roughly $2 trillion, in other words this picture shows just half the money that Britian will eventually owe under this Governments plans.

At the moment the Government is quoting an annual overspend of 12.5% of national product. What that means is that the Government, who spend about half the national output, is borrowing about a quarter of the money it is spending every year. Alistair Darling has said he wants to 'half the deficit' by 2014 - which some lazy reporters state as 'halving the debt' but what that means is that the annual amount by which the government is short will fall from 25% to about 12%; the debt will pile up but half as fast as it is at the moment.

This is like a loss-making business CEO saying 'in five years I will halve our losses' - no chief executive would be given that long by his banks, and neither will Britain PLC.

When Labour came to office the country owed £350bn, exactly one quarter of the debt we will end up with when they leave. The taxpayer will have to service this enormous debt pile and then, sooner or later, make an effort to pay it down. Even then we will probably have higher taxes and borrowing costs and a weaker currency than any other European country for decades ahead. And the depressing thing is that even now the Government feel no need to accept that this is a problem, in today's pre-budget report the Chancellor came up with hardly any cuts and virtually no new tax-raising measures; he fools no-one.

Consumer and business confidence will not return for as long as the prospect of either economic collapse, runaway inflation or skyrocketing taxes and interest rates hangs over our heads; and that threat won't go away until this massive debt burden is faced up to.

Above all enormous national debts make this country weak, the foreign investors -Chinese, Indian and Arab Governments, overseas bankers and Sovereign Funds who have lent the money will be calling the shots here for years to come.
1 comment: 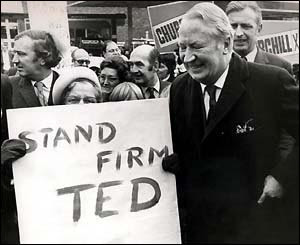 Why is a hung Parliament a threat to be afraid of ?

The political pages have been awash with stories concerning the possibility that the General Election could result in a hung parliament, this is when no single party has a majority in the House of Commons.

This last happened in 1974. During the oil crisis endless political strikes by militant miners and dockers threatened to bring our democracy down. Ted Heath called an emergency election to establish 'who governs Britain'. The totally unexpected answer was: 'not you, mate'. Labour were returned to power as the largest single party though with a minority in the House, eventually going into a disasterous formal coalition with the Liberals in 1976.

The press have been full of speculation about a similar outcome when the election is held next year. The reason is a recent fall-off in the very large Conservative leads in the polls - from 17% to 10% or less in recent reports. Converting national vote shares into actual seat shares is very difficult in these days of target seats and the like but some pepsologists have suggested that the Tories need more than a 10% lead in the national polls to be sure of an overall majority, hence the speculation about NOC (No Overall Control).

The Liberal Democrats and the Nationalists in Scotland and Wales are dreaming of the goodies they will might extract if they hold the balance of power; but they are the only ones.

Everyone else is terrified.

No Overall Control is a turn of phrase that for most foreign exchange dealers and Gilt salespeople gives them nightmares even when times are good. When a Government like ours needs to borrow trillions from foreigners just to stay afloat the letters NOC equal the kiss of death.

In 2009 the Government has spent nearly 30% more than it has raised in tax, the difference this year - £180bn - has been covered by the sale of Government bonds (gilts) to investors. However all year the Bank of England has been printing new money (Quantative Easing) which it has spent buying up existing gilts, forcing investors to buy new ones from the Treasury.

QE is now ending and next years budget deficit will have to be financed without it. The funding crisis that a massive increase in borrowing like ours might have been expected to cause has simply been delayed by QE until next year.

If you add in the uncertainty of a possible hung parliament a currency and funding crisis early next year looks a real possibility. What this would mean is a loss of confidence from international investors needing drastic interest rate rises to lure them back, perhaps credit and currency exchange controls to stop British residents taking their wealth overseas and ultimately the possibility of our Government, like Russia a few years ago, not having enough money to pay it's own wages bill.

International investors will only lend money to a state that has a clear plan to repay its debts quickly. Because of the political chaos in 1976 we were unable to demonstrate this and the country instead had to turn to the IMF for emergency aid.

That fate looks unlikely to me, I don't agree with the pepsologists and I think a 10% Conservative lead will give us a workable commons majority and the mandate to make the changes that will maintain investor confidence.

I also think there is a paradox to hung parliaments: the possibility of having one makes actually ending up with one less likely.
No comments: