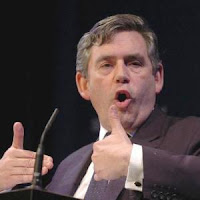 I GOT THIS JOB
WITHOUT AN ELECTION,
VOTE FOR ME
(or not - I'm staying either way)
We have learned from Cabinet Secretary Sir Gus O’Donnell this week that in the event of a hung Parliament Gordon Brown will remain as Prime Minister, even if Labour is not the largest party.

Incredibly this means that Brown, the one Prime Minister who has never won an election, may remain in power even after he has lost.

Labour Cabinet Ministers may be allowed to stay in charge even if voted out of their own seats because the Civil Service fear for economic stability if the Government is in flux for just a few days.

Parliament could be suspended for weeks while behind closed doors the Prime Minister does a grubby deal to cling to power. And there is only one party he will turn to - the Liberal Democrats.

The Lib Dems will try to sit on the fence until after the election, of course - to conceal which way they will jump until it is too late for us to do anything about it. But voters are not stupid. They know the Lib Dems track record; in debates and on TV interviews the Lib Dems side with Labour every time. In Wales, in Scotland and in our British Parliament during the 1970’s Labour coalitions have always been with the Liberals.

Other parties are campaigning for your vote at this election, but none will win seats.

So it is the Liberal Democrats who are blocking the path to stability; Conservatives must win back the seats they lost to them in 1997 if David Cameron is to win a working majority - to get rid of Gordon Brown and start Britain on the road to recovery.
1 comment: 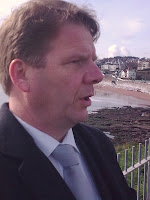 I did the first public meeting of this campaign yesterday, a question-and-answer session with the local hoteliers.

The issue that came up time and again was the economy. People have largely been isolated from the ‘depression’ so far - and there was the slightest feeling in January and February that we might escape the worst; in my view this goodwill was directly linked to house prices which had been rising since last summer, but the last weeks news has been about falls. This was reflected yesterday, where we all noticed a sharply downbeat attitude from the people attending the meeting concerning the economy with several questioners openly suggesting that ‘the worst is yet to come’.

What makes this interesting is the nature of the attendees. Hotel owners in March have a pretty good idea of what is coming down the line for the summer. A weak pound and increased security fears are supposed to mean lots of people holidaying at home - so if the recession was ending you might expect a bumper season this year in Torbay. If you were expecting a bumper season you would imagine the first people to know about it would be the hotel companies taking the bookings.

So why are the hoteliers so gloomy?

People have really started to notice rising retail prices, I haven’t heard this as a political issue for decades, but it is firmly on the agenda now; with people saying ‘not only is my pay being cut but the prices in the shops are rising so we just can’t afford the luxuries anymore, can you believe the price of X is now Y?’.

And they have a point. The headline rate of inflation is in the 3-4% range for the first time in years, but the figures are a mish-mash of statistics mixing bills, infrequent purchases such as furniture and clothing with daily consumer items such as food. In the real world food and petrol have been shooting up since the pound dropped last spring. Food shopping in particular is becoming painful; butter is over £1, bread headed for £1 a loaf and even a Mars Bar is now about 70p. I bought a bike magazine at the station last week and that was £4. And yesterdays falls in the value of the £ mean the price pain is set to worsen. Yet for most people their take-home pay is static or falling and has been for over a year.

Recessions initially are just news stories, shops and factories shut but if you are not immediately jobless it is of passing interest. They become a political issue when they affect how *everyone* feels. Once we feel insecure at work, the equity in our home is halved and we are poorer at the shops the recession is affecting us, and that reflects in the polls. That is now happening, the 1980 recession ended in 1981, but the feeling of prosperity and growing living standards took until 1985 to arrive; in the short-lived 1991 recession the 'green shoots' of recovery appeared in 1992, but the accompanying 'feel-good' factor was still missing until 1995.

The thing that struck me most yesterday was the recognition by people there that the Government have already emptied the armoury in trying to tackle the recession, and that if their action has failed (and people agree that it has) the outlook makes them feel very, very vulnerable because the Government has nothing left, and neither do most households.
1 comment: 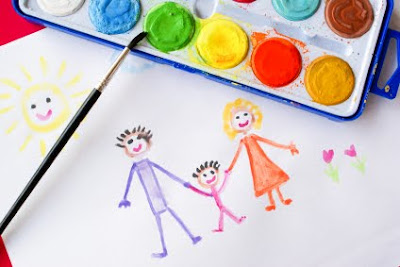 What do you want to be when you grow up Lucy?
Lucy looked at her Dad and said "I want to be the Prime Minister."
"And why do you want to do that?" said her Dad.
"Because I want to make sure that homeless man and his dog in the doorway across the street has something to eat" says Lucy.
"That's my Girl" says her proud father, "Welcome to the Labour Party."
Lucy's mum had overheard the conversation from the other room, and not being quite such a fan of the Labour Party, she came to join the discussion.
"I have an idea" said Mum. "The garden needs weeding and the driveway needs sweeping. If you do that for me Lucy I will give you £10. Then you can go and give it to the man across the street and he can use it to buy some food for himself and his dog."
Lucy considered this offer for a few moments and then a look of puzzlement crossed her young face, and then her eyes widened with inspiration.
"Why doesn't that man come over and weed the lawn and sweep the drive himself? that way you can just give him the £10 - and he will feel better because he will have earned it?" she said, with that faultless logic children often display.
"That's my Girl," said her mother... "Welcome to the Conservative Party" .
3 comments: