'Campaigning on the rates' controversy erupts in the Bay.

A big story in Saturdays Herald Express accuses local Lib Dems of funding their MP's election campaign out of a fixed levy of their council allowances; evidently outraging the new editor and causing a flurry of phonecalls and emails to yours truly from irate residents (one of whom claims to be a Lib Dem voter) all angry that we Conservatives may have been disadvantaged in the election as a result.

As it happens I don't think that the amounts involved would have had a significant effect on the election result but the principle at stake is very clear.

I don’t think many people have any idea the extent to which politics is already funded by the taxpayer. The costs of running Parliament have tripled since 1997 mainly as a result of a massive hike in the allowances MP's can claim for 'constituency support'.

Most MP’s intentionally or otherwise find a large chunk of their costs allowances finds its way to benefit their constituency organisation; for instance by renting offices or employing activists as researchers. Our own MP employs a grand total of five staff including his wife and two prominant Lib dem councillors. They are employed work exclusively on non-political constituency business while they are being paid from his allowances; but presumably can do what they like the rest of the time.

Mr Sanders suffered from the lowest turnout on record at the last election in spite of record expenses and spending on support voter turnout at an all time low suggests that customer satisfaction with MPs has not benefited from the largesse of the Government.

So although our MPs total costs easily exceed £1,000,000 each Parliament and now we learn that he needs council taxpayer’s money as well.

Aren't the already significant benefits of being the sitting Member of Parliament able to turn up to coffee mornings and dinners enough for the local Lib Dems to raise their campaigning cash though fundraising, as we do?

I doubt the Devon Dumpling will ever forget this lot.... 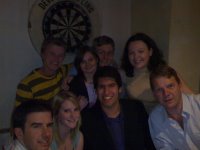 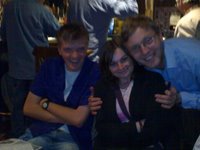 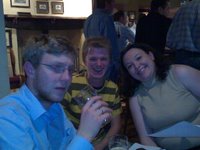 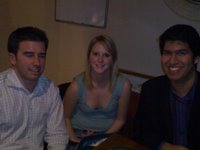 There are other pictures on my camera too torrid to show.

I am accepting 'political donations' from anyone else who doesn't want their pictures published. Sadly Claire did not come up with enough to prevent me showing her about to eat her hand: 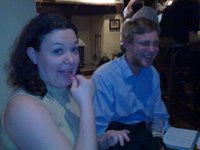 Is Torbay to be the new 'Monte Carlo' or another 'Las Vegas'?

Went to a very interesting debate last night with Mayor Nick Bye and Civic Society leader Ian Handford slugging it between them the question of whether Torbay needs a new 'super Casino'.

The audience were almost exclusively drawn from the congregation of St Matthias church and so it was clear from the off that they were unlikely to be persuaded by Nicks argument that Torbay needs to meet the needs of visitors and provide a wider range of leisure activities than it does at the moment.

last night was a triumph for civilised debate (even though I suspect coming out in favour probably cost me a few votes !) and was well handled by chairman David Scott.
I thought Nick was outstanding - humourous in just the right measure - but also he showed a determination and sense of purpose which went down well even with those who oppose the Casino bid.
Perhaps if we had more public debates like this critics could understand more clearly the reasons why the Bay has failed to move forward effectively in the past; it's not just a lack of leadership by councillors but a reluctance on the part of the public to make or accept change.
One benefit of having a directly elected Mayor that is becoming clearer by the day is that there is now one person to passionately and (in Nicks case) patiently put the case for change to the local community.
I believe that they are already responding more positively than ever before; even if in the case of last nights audience they weren't persuaded about this particular proposal; Nick lost the final vote by a ratio of about three to one!
3 comments: 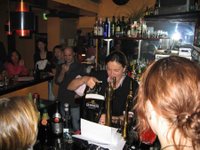 Join us at the Devon Dumpling on Thursday

A handful of 'Conservative Future' folk and I are getting together on Thursday for a drink at the Devon Dumpling (Devon Dumpling 108 Shiphay La Torquay Devon TQ2 7BY Tel: 01803 613465. TQ2 7BY)

Conservative Future is the Conservative version of Club 18-30 so quite why I am invited heaven only knows, I will try to keep up - I promise.

The plan is to have a beer or two and meet the National Deputy Chairman of Conservative Future Claire Palmer who will be joining us for the evening from London.

We probably won't get round to talking politics much... but you never know.

If you are still of an age to call yourself 'young' then please come along and we will make you welcome.

The Devon Dumpling is near Torbay Hospital and we will probably congregate upstairs.
2 comments: 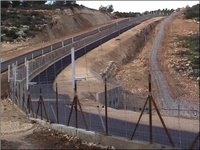 I returned from Israel on Friday in some ways more confused than when I left a week ago.

It's been very easy as an outsider to criticise Israel for being heavy handed with her neighbours (see posts passim) but in many ways going there, and especially meeting the people, makes life for me more complicated and, to be honest, a little less comfortable.

The first thing to point out is that Israel herself is riddled with doubt, both about the Lebanese conflict and the security fence. As a vibrant free democracy such doubt is visible daily in the newspapers and in the pubs and restaurants where politics is the main point of daily discussion - in vivid contrast to our obsession with the goings on of various C list celebs in this country; and most of her Muslim neighbours where political dissent is not allowed.

Undeniably the security fence represents an unacceptable restriction on Palastinians, in my view making their economy totally unviable. Aside from the fact that it is far from the 'Berlin Wall' as presented in our media (less than 5% of it is concrete, the rest is security fencing as illustrated above) the fact of it's existance creates a divide between Jew and Arab where in many areas there didn't used to be one; compounding an already difficult racial divide and making the have and have-not division even more stark than it already was.

What has driven the Israelis to such drastic action is the plain fact that no-one else is able to defend their country against constant missile and bomb attacks from neighbours; worse, there is almost no-one of authority in either Gaza or Lebanon for the Isrealis to do deals with, even if they wanted to. The fence does at least work, the number of suicide bombings has fallen to virtually nothing since the main parts became operational.

Isrealis that we spoke to everywhere - even in the IDF, (Isreali defence Force) are desperate for a strong and clear leadership to emerge amongst the Palastinians so that they can try to negotiate a lasting deal on a viable two-state solution; at which point they would gladly dismantle the fence.

But the only leadership available to talk to, Hamas, have remained committed both to armed resistance and the destruction of Israel and until they say otherwise, Isrealis feel compelled not to deal with them.

There is an outside chance that drastic segregation in this way might just persuade more moderate Palastinians that they need open relations with Israel - they need access to Israeli businesses and consumers for jobs and prosperity, but it's a long shot in my view.

But in the end I concluded that, faced with similar circumstances, we would do the same as the Israelis. 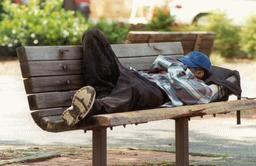 Is this really a suitable 'address' for someone on the Sex Offenders Register?

There has been a very good response to my campaign to highlight the daft rules on sex offenders registration that means they can give police 'approximate whereabouts' instead of a formal address.

According to the Home Office "under section 83.7 of the Sexual Offences Act 2003, an offender who has no residence in the country must give the address or location of a place where they can regularly be found. If the offender is not regularly in the place they have given as their residence, they are in breach of notification requirements and they will be prosecuted."

So it appears that homeless sex offenders can get away with saying 'I live on a park bench in Torre' and that is satisfactory within the law, provided when the police go there they can find them.

Aside from the obvious strain on police resources (just how many of these people are the Police having to 'keep an eye on' ?) there are several other important issues here. On the one hand, if these people are so dangerous that they need to be constantly monitored by police then surely leaving them literally 'on the streets' is a serious security lapse.

On the other hand if they have been succesfully rehabilitated and are not a danger to society then why do we need a sex offenders register at all?

Either way this is another case of the Home Office making rules up to suit tomorrow's SUN headlines and then discovering loophole after loophole.