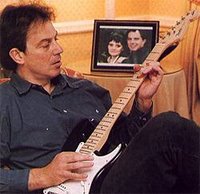 Is Tony Blair about to spend more time with his guitar?

It has been a tumultuous week for the Prime Minister at and the speculation about his future continues to increase.

The education vote, where nearly a quarter of Labour MP’s rebelled, was passed because the Conservatives backed him.

This is very damaging to the morale of Labour MP’s – many who are now openly complaining about Tony Blairs autocratic style; his lack of ‘True Labour’ instincts and his tendancy to bypass parliament.

Then there is the increasingly damaging row about ‘peerages for cash’ which has inflamed sentiment amongst many at , including the labour party’s own treasurer.

The weekend press will be interesting, because the Murdoch papers (News of the World, Sunday Times) have been pretty pro-Blair so far, but observers have noticed a distinct editorial shift to being much more Brown-centric recently.

Personally I think Blair will have to be dragged from No10 – his fingernails leaving scratch marks down the hall- just as Mrs Thatcher was. I don’t believe that Gordon Brown has the killer instinct in him to wield the dagger and I don’t think the Labour Party has anyone else with the guts to try.

He will therefore remain in until the moment he chooses to leave or until the electorate vote him out.

I still think he will stay there right up to the next election and I am one of the very few people I know who genuinely believe that he may yet try and fight another election as PM.

Would we Conservatives do better with him there or with Gordon Brown instead? - The polls say that Blair staying on would make the Conservatives task more difficult and for once I agree with them.

On a seperate topic Marcus, Could I interest you in signing up to www.reinstateroger.com? It's a worthy cause.

The sooner Blair is got rid of the better.

Preferably by losing an election.

Despite gushing media coverage the latest ICM poll puts the Tories on 34%, still three behind Labour.

During the woeful spell the Lib Dems had either side of Christmas you crowed about their flaky support. Well the Lib Dems are up to 21% pretty promptly since those remarks, so a Tory victory looks as far away as ever.

Just as voters saw Major as a 'change' from Thatcher, maybe voters will be satisfied with a change at the top of the Labour party.

And your party are offering a slippery Tory Blair-like clone in the shape of Cameron, just at the time that the vacuous Blair is running out of political capital.

Of the three main parties it is the Tories who still have the greatest problems - still flatlining in the lower 30s in the polls and risking your core vote to boot !

The Lib Dems, still seem to have distinctive policies whilst New Labour and the Tories are becoming seemingly indistinguishable.

You are very selective with your polls Barry. On the very same day another poll put us four points ahead of Labour and the Lib dems on 19% - three points down.

For your interest this is nine points higher than our level of support at the same point in the last electoral cycle; i.e. Jan-Mar 2002.

More bad news for Blair this weekend. Must be time to go but for your sake Marcus I hope he stays on because it can only help you to win next time.

Me ? Selective in use of polls ? Hmmm..you report those that favour your party but keep quiet when they don't - hence my drawing your attention to the ICM poll !