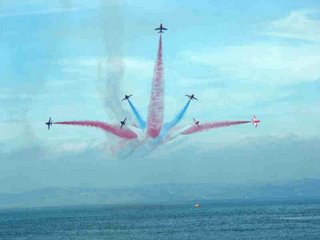 We spent the afternoon with friends and all the children watching the Red Arrows perform over Torquay Harbour this afternoon.

I am fortunate enough to have a house that has a terraced Garden that looks out across the Bay from directly above the harbour and we had a superb viewing spot.

There is no doubt that the British Armed Services are the most proficient in the world.

Seeing the planes in action reminded me how stretched our armed services are at the moment, when - since 1947- have we had soldiers fighting for their lives in so many places at once?

Why is it that we seem to have been dragged into so many conflicts?

Could it be because the 'war' on terror is a nice little distraction from the less pleasant realities of the way the country is (or isn't) being run - or is that being just too cynical?

There is a very good satirical movie (can't remember the name) in which Dustin Hoffman plays a Hollywood film director called in to stage a fake war to ensure the US President gets re-elected on a wave of patriotic euphoria.

The film was Wag the Dog by Barry Levinson and also starred Robert De Niro, and a whole raft of other household names, in their own household at the very least.

I have to agree that the 'war on terror' is an exercise in smoke and mirrors. Distracting everyone while trying to force in legislation.

Thank you Cptn, the bit I remember best was the little girl in the film studio clutching a bag of potato chips that was transformed by the wonders of electronic trickery into a frightened refugee escaping 'terrorists' clutching a kitten....

I am sure we face a whole raft of oppressive and unneccessary legislation and I fear the restrictions at airports are just the beginning.

Marcus, I'm afraid I can't get today's comments link to open up. Just wanted to say that your trip to Israel sounds very interesting. I am a member of the CFI, but have not been lucky enough to have an invite. I wrote about Terry Wait's view on this yesterday, who is fair minded all round in his humanitarian way.