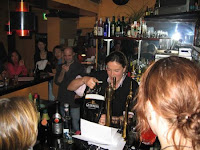 The Conservative Social Justice Policy Group has launched it's report and one of it's more controversial recommendations is to rapidly and drastically increase alcohol duty as a way of reducing binge drinking.

Its idea on higher alcohol taxes would add about 7p to the cost of a pint, and raise an extra £400m a year to help fund treatment of alcohol abuse.

Justification for this is the fact that since the mid 1980's the 'affordability' of alcohol has risen pretty much in line with consumption, in other words as booze has become more affordable relative to income, people drink more of it; so presumably the opposite will also be true.

This was identified as a problem in the 1700's when cheap, strong gin became the scourge of London, with alcoholism rife; this lead directly to the introduction of alcohol duties which did indeed eventually bring the alcoholism epidemic to an end (although a number of other factors appear to have converged to discourage consumption of gin as well as action by Government, including stricter acceptable standards of social behaviour, the introduction (at the top of the social scale) of tea drinking, and an increase in religion that criticised coarseness and excess.

So increasing taxes will probably work, but not without a widespread change in public opinion about drunkenness which seems far less likely.

I also wonder what part the increasing strength of our alcoholic drinks has here, a few years ago draught beers were in the 3-3.5% range; today they are generally 5 - 5.5%.

Oh surely the McDour One himself will be the first to propose a new Temperance Movement?

Or perhaps this was the Tories Secret Plan?

Isn't Brown a teetotaler? - He looks like he is.