Trouble in Paradise or silly season flash in the pan?

Hours after having got home from my family holiday I was contacted by a reporter at the Herald Express keen to 'get a response' from me on the news that my neighbouring Conservative candidate, Anne-Marie Morris in Teignbridge has apparently come out against the Kingskerswell bypass. 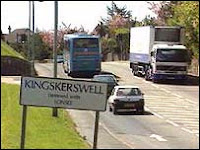 She is absolutely entitled to her view and I congratulate her for her honesty; but the Bypass is an absolute essential plank in South Devons economic plans and simply has to be built.

I know of several ex-local businesses whose specific reason for relocating East (or in one case South -to be nearer the A38) was the poor link road and countless hotel owners lobby me every year about the loss of trade to them from frustrated holidaymakers saying they won't come back.

Yes, there will be disruption and the bypass will do harm to the view from a few scores of houses along the route. But the Bypass has been on the drawing board for 30 years and the overwhelming majority of those who live near the route must have bought their property in the full knowledge of the plans; and presumably paid less as a result.

I have never held back in my views that the so-called Kingskerswell "Alliance" is in fact little more than a handful of very media-savvy activists -all whom live on or very near the proposed route - representing the opinion of no more then a tiny minority yet behaving as if they speak for many more.

The poor showing they have had in local elections is proof of this; let's face it if you can't find even a few hundred local people to vote for you at a parish election your campaign isn't enjoying widespread public support, is it?

I cannot and don't accept that their voices represent widespread public opinion -even in Kingskerswell, let alone in the wider area; indeed there has been an exhaustive public debate for decades and yet the net effect of this has been for support for the bypass to GROW.

So on the one side you have a small but dedicated band of campaigners but on the other you have 86% of Torbay residents who argue that the road is their umbilical cord to the rest of the country; along whose length nearly all of us are forced to grind our way on a regular basis.

I therefore think that while Anne Marie is being very brave (and very principled) in backing their cause I fear she is on the wrong side of this particular argument, both politically and practically.

But I didn't go into politics to agree with everyone all the time, did I?

Your comments on the Kingskerswell Bypass, and the Kingskerswell Alliance, are innacurate and misleading.
We are not a "so called" alliance. We are allied to the CPRE, Transport 2000, and other local grops such a Yalberton and Collaton. What is "so called" about that? We can give you the names and addresses of over 500 people in the village that support us, rather a large "handful" wouldn't you agree? We also obtained over 2000 signatures for a petition when we campaigned outside Sainburys at the Willows, people were literally lining up to sign.
Poor showing at local elections? We have four parish councillors that have been elected on an anti bypass ticket; what is poor about that?

The reason you are so uninformed about the real state of public feeling is because you have never met with the Alliance to hear what we have to say and as a responsible candidate I'm sure you will be happy to remedy this, so may I on behalf of the Alliance extend an invitation for you to meet with us at your convienience which I think would benefit us both

Dear oh dear........ the same old propoganda that has been trotted out for the last 30 years.

This view is designed to pander to the popular vote (and those with noses in the trough).... yet represnts outdated thinking.
Mr Wood should know full well this scheme won't receive funding and yet choses to back something destined for the scrap heap.

Meanwhile Anne-Marie Morris has shown a vision and an understanding of the issues - why, because she has visited Kingskerswell. So Mr Wood may well have to eat his patronising words?

But you both make my point for me.

As passionate and dedicated to your cause as you all are - you can't change the fact that you represent a tiny minority of residents.

'Anonymous' says "This [my pro bypass standpoint] view is designed to pander to the popular vote" well, yes it is. You are not speaking up against some conspiracy, the reason all the main elected politicians for the area back the bypass is 'cos they know that is what residents want!

500 people opposing the road *is* a handful compared to the minimum 87% of 140,000 Torbay residents in several surveys who want to see this road built as a matter of utmost urgency. In separate polling in Newton Abbot and Teignmouth very large majorities (60% or more) support the plans, presumably one reason why Devon are so supportive.

So the only people who oppose the plans are a tiny minority of green activists (who would oppose anything) and those few who will lose their garden - whose active protest I understand but don't agree with.

2,000 signatures was a paltry total, frankly. We raised ten times as many in a matter of weeks about toilet closures and I have had more than 4000 in one afternoon when we opposed the one way scheme for Hyde Road!

I only ever hear from people complaining about the Kingskerswell Alliance, not the road!

I recognise that it is very hard to accept the will of the majority when it goes against one's own interest, as thousands of people who hunt and millions of people who smoke have recently discovered.

But that is the way that a free democracy works. You are entitled to protest and try to persuade and you have had 30 years to win a majority over to your view but that has just not happened.

I am privileged to lead The Alliance who are a group of people who believe passionately that their village will be ruined by this road if it is ever built. We also believe that there is a package of alternatives that could not only ease the problems on the A380 but answer the needs of all. These could be installed faster than the bypass, at a lot less cost than the estimated £130million and are sustainable. We recently handed to Parliament a petition with over 2000 signatures. During canvassing we were overwhelmed by the lack of understanding held by local residents of the plans. Over 800 gave addresses in Kingskerswell the majoity of the rest coming from the corridor that the road will open up to development. Or only limitation to many more signatures was time available to our canvassers.

I travel many miles annually over southern England on business and see companies starting up and thriving in areas where the infrastructure and congestion is far worse than here. If companies are given incentives and get their strategic marketing right they can succeed here just ask Keith Richardson owner of the Grand Hotel.

Do I take it then that you are politely declining our invitation to meet with officers of the Kingskerswell Alliance?

May I request that you show us the 87% of Torbay who support the bypass.

People do not just complain about The Alliance I can show evidence with a number of letters that support us.

At the ever rising cost, now £130million the road is unlikely to ever be built. How can a road that may never be built be a solution to a problem? If it is by DCC's own figures Co2 emissions will rise by 18% generally.

I am informed that the footprint left by the road equates almost to the size of the village.

The only entrance is at both ends so traffic from new developments will only be able get to Torbay or Exeter via the A380. Square one comes to mind.

I do wish to explain, based upon the facts to hand, to those people who matter namely reidents of Kingskerswell what will happen to our village. Our petition showed that many do not know.

I am happy to talk to you anytime, if you email me your contact details on mw@banfu.com I will be in touch.

I did an extensive detailed voter survey in 2003 to which we had 3,600 replies and 87% put the bypass as their 'no1' local priority. I did a web based survey this year and the figure was 84%; I am doing a postal survey of 20,000 local voters this Autumn and I will post the results on my website; but I don't doubt the figure will be the same.

I am convinced, totally and without reservation, that the population I hope to represent want this road and with respect, I spend a great deal more time talking to my local residents than you do.

I don't doubt that some people support you, Ken; and I am sure that those who do, do so loudly and vigorously because its their homes we are talking about building a road beside; of course I understand that.

But just because some people shout loudly doesn't make them a majority.

Finally though, I don't understand why, if you are so sure the road will never be built, you are going to all this trouble and effort to oppose it?