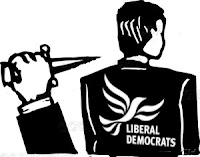 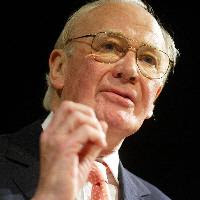 Is this becoming a bit of a habit?
Two years or so ago the local Lib Dem council group had a spectacular falling out, first deputy leader Andrea Colbourne quit and then leader and Lib Dem wunderkind Chris Harris was ousted in what turned out to be a very acrimonious coup. Later the ill feeling spilled over into accusations and counter accusations between councillors and MP over who was to blame.

At the time I pointed out that in politics there is very firm a link between morale and performance. Parties who are looking forward to losses inevitably become fractious and bad-tempered- as members either fight for their survival or play the blame game.

Now the national Lib Dems seem to be headed in the same direction, with a series of poor poll results causing a very great deal of bad tempered behavior at Westminster by MP's who annoyed their activist base intensely by their move against the very popular Charles Kennedy.

Now poor Ming has joined the redundancy queue because once again the LD's have fallen out with each other over their flatlining poll results.

Having lived through a long period of this kind of thing in the Conservative party I can say with all honesty that the worst is probably not over the for the Lib Dems, for whoever takes over will have to cope with several factions all riven with resentment and anger, with a Parliamentary party half of whom are concerned about their jobs and futures and a dwindling activist base bewildered and confused by the behaviour of their MP's.

But more challenging still is the need to lead the party in one direction or another. The political firmament has changed and the concept of being 'equidistant' from the other two parties cannot sustain in a world where the middle ground is already so closely fought.

Therein lies the problem. If the LD's go left of Labour they risk losing their seats in the South and South West; if they go right of the Conservatives they will lose their seats and potential gains from Labour in the cities of the North.

The fact that your normally very vocal namesake has remained silent speaks volumes.

As a now long lost Lib Dem member I think their big mistake was dumping Charlie (because of petty jealousy , not drink).

They haven't recovered and they won't.

Who's next, and how long will he/she get?

What are his chances of hanging on in there? Somewhere between "slim" and "none" I reckon. He looks like a bit of a risk to me.

I doubt if Huhne will get it, in my view the Lib Dems will over compensate for Mings disastrous media persona.

They will probably pick "David Cameron Lite" (Nick Clegg) in spite of the fact that the one thing the party needs (a complete policy renewal) is the one thing he is the least likely to give them.

Anon you are so wrong ! I'm offline at present following a house move that's all ! As the Tory leadership race proved it is possible to have an open contest with a range of political choices + full debate in a way that enhances perceptions of party. We have talent within our ranks as you'll see over the coming weeks !

We have talent within our ranks ...

And it's very well hidden too.

Huhne and Clegg have less than 5 years of parliamentary experience between the two of them.

But Tripehound, a few post back Marcus was The extolling virtues of not having been in Westminster for too long. Where is the talent in Devon Tories' ranks?

Marcus how selective your analysis is ! You revel in tales of **past** LD disharmony, but you unsurprisingly gloss over the tensions between the mayor and fellow Tory Cllr Gordon Oliver - one of the incumbent Mayor's rivals for that post in '95. And, of course, lets not forget the 'unifying' figure that is Kevin Carroll. It'll be interesting to see if he leads your council group for the full term of office. The very public spat between Oliver and Bye has done little to boost our tourism industry.

Barry, I don't want to bore any more readers with tales of the countless inter-councillor spats over the years between elected members of both parties.

Cllr Oliver is not in the cabinet and, as a backbencher, is perfectly within his rights to disagree with the Mayor if he wants to.

A little local disagreement is one thing, but for *both* the past leader of the Local Lib Dems and his successor 'going public' against their own MP across nine pages of the local newspaper is something else entirely - as you well know.