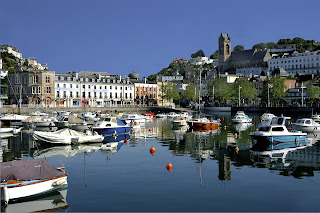 Vision or Nightmare- at least there is a future to discuss.

Whether you think that the Mayoral vision for the future of Torbay is your idea of heaven or a blueprint for hell on earth there is one thing that is long overdue and that is any kind of vision at all.

One of the main benefits of the mayoral vision is that at last there is a proper debate under way about the future shape and economy of the Bay; and there is at last a clear dividing line between the local political parties about what the future could be all about.

Unfortunately for all of us, successive Town hall administrations have failed to seriously consider the long term prospects for Torbay in anything other than negative terms. For 20 years the council has been content to presume that their job was simply to manage the decline of tourism with as little drama and hardship as possible.

Now at last things are on the move.

In the Blue corner we believe the prospects for this beautiful area haven't looked this good since the mid 19th century when the railways came. A combination of global warming, increased airport security, fashion and shortage of time will mean that more and more people will choose to take short breaks at home. Add to that the increasing demand from broadband connected workers to move away from the South East and seek a better quality of life (and lower house prices), and the fact that the baby boom generation are approaching retirement and the future looks bright, proviided we make sure the Bay is kept up to scratch. We look forward with confidence to a clean, prosperous and safe Torbay as popular as she ever was.

In the Yellow corner the stance is very different. To them Tourism is an industry that just brings hordes of unwelcome visitors. They can't help but dislike the money it makes for some people. They don't seem to like incomers at all, judging by the recent complaints by the MP about Eastern Europeans.

The tendency so far has been to simply oppose everything; the casino, balloon, industrial park, retail park, Goodrington, any major redevelopments in the towns etc without really so far offering any alternative ideas for economic regeneration.

The language used by them sometimes conjures up an image of a 'rust belt' backwater, not the thriving, prosperous and popular place that Torbay actually is. What vague ideas they do have seem to be built almost entirely on state handouts - either to a benefit dependent underclass, handouts for government agencies to create non-jobs in some pointless quango; or handouts for the council bureaucracy to expand still further.

This is a formula of despair that the public rejected in 2006 at the mayoral election when their candidate was so roundly beaten; then again in 2007 when the lost control of the town hall; but they just seem to be stuck in a time-warp and no amount of losing is going to persuade them to think again.

Most of the poorest in society have ambition; they don't want to be on low incomes and they don't want state handouts; what they want is an opportunity to succeed and do well and a thriving Torbay tourism economy is the best way of getting it.

I cannot understand why the Liberal Democrats seem to be so obstinately against making Torbay more prosperous, but they do. Perhaps they are worried that a thriving and successful town is usually very much a Tory town.