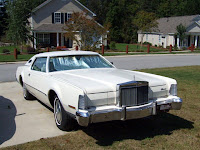 At last the mainstream media have picked up on the tickling time bomb that is the vehicle Excise Duty changes due to filter in during next year.

Nearly half of all drivers will be hit with significant rises in Vehicle Excise Duty (VED), while fewer than one in five will see any benefit from the reforms, according to official data.

The figures directly contradict Gordon Brown's claim in the House of Commons that most drivers will actually gain from the changes.

It’s not the car tax itself but the way in which the bad news has been hidden away until extracted by the media later on.

This is stealth taxing, and while Brown could get away with it in the late ’90s when the economy was booming and general taxes were still relatively low nowadays people can readily see it’s a dishonest way to do business.

If this Government was a consumer company they would be a ‘You and Yours’ and ‘Watchdog’ repeat offender.