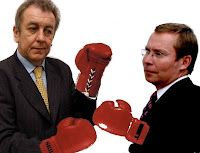 There was a very interesting comment made by a poster on Tuesdays thread which seemed to indicate that some Lib Dems locally are considering the possibility of pitting current Lib Dem MP Adrian Sanders against current Conservative Mayor Nick Bye when his first mayoral term of office comes to an end in two and a half years time.

The poster, under the name 'Yellow Ribbon' said this: "some Lib Dems are trying to keep the job of 'Lib Dem prospective mayoral candidate' open until after the result of the next General Election."

Many of us in the local Conservative Party have been wondering for a while why the Liberal Democrats have not begun at least to groom a potential rival to Nick Bye. 'Embedding' candidates very early on was a Lib Dem innovation - Adrian Sanders was first picked to fight Torbay in 1990 so that by the time he won in 1997 he was already a very familiar figure to voters. So you would have expected the Lib Dems to have picked a mayoral candidate long ago and had him or her promoting themselves by being used as a spokesman to 'front' attacks on the Mayor.

Up to now we assumed that the Lib Dems were in some confusion over the mayoralty, indeed we had presumed that the party was so heavily committed to trying to abolish the post altogether that they couldn't find anyone prepared to stand, and that was the reason for the continuing vacancy.

With even the Lib Dem high command admitting that nearly all the South West Lib Dem MP's seats are likely to be lost it must have crossed some in the party that their chances of holding on here in the Bay have significantly diminished since the 2005 result and deteriorate further with every day that Gordon Browns government continues to disintegrate and the public become more and more determined to be rid of New Labour.

'Yellow Ribbon' has raised the intriguing possibility that the reason that the Lib Dems haven't picked anyone is because some of their people want to keep the job 'open' so that, if bay MP Adrian Sanders does lose the Torbay seat at the next General Election he could take up a new role - standing against his old rival Nick Bye in the elections due the following year.

Possible, but unlikely in my view. But what do you think?

I think it's a non-idea, if he'd just lost the GE why risk taking another drubbing - and anyway voters hate that kind of 'gizza job' candidature - look at Pedrick Friend, did well in 2005 with thousands of votes - months later he was struggling to win a few hundred for the mayoralty.

You were right first time, they haven't got a candidate because no-one wants to do it.

A great strategy that would probably work; if they don't come up with something - and soon- Bye will win again not because anyone agrees with him but because he will be the only candidate anyone knows.

Lib Dem activists might privately dream of Brian Localbloke riding to their rescue but I am assured that he won't have the thought of losing his Westminster seat so much as mentioned.

Mrs Localbloke in particular considers anyone who brings up the subject to be grossly disloyal and immediately removes them from the Localbloke Christmas Card List.

Lib Dem 'high command' says party will lose virtually all SW seats. Translate that into meaning Marcus 'Mystic Meg' Wood says I hope they lose all SW seats. As if any party ever admits impending defeat even in the most unlikely of seats, let alone a traditionally strong area for the Lib Dems.

I'd stand for Mayor Marcus but I think I'll throw my hat into the ring for one of your parliamentary researcher jobs when you reach parliament, but I'd expect re-location expenses as I don't expect that job to be Torbay based !!! I think Mark Hellyer expressed an interest some time ago too didn't he ?!

Actually by polling day for the next mayoralty election there may well be a 'anybody but Bye' mood amongst the bay electorate. Who can genuinely tell the mood of electors ? A council by-election in a 'weather vane' ward would be very interesting... at the minute LD and Cons alike are simply speculating like mad.

I'm convinced Bye is increasingly loathed, you see it differently !

On a less partisan note, having lived in many parts of the country I have never known the hostility to a local council / councillors to match what exists here in the bay. That has applied to both major parties. An unhappy event for those who value local democracy. It's hardly an encouragement for people to stand is it ?

Finally, just keeping an eye on your scribblings once again Marcus !!

My comment about the Lib dems High Command was a bit of an exaggeration I admit, but Mr Clegg has decreed that all the partys effort and money will be directed elsewhere and in a separate interview I read that even Lord Rennard accepts that holding on to many of your seats in this part of the country will be 'a very tall order indeed'.

As you indicate none of us can tell, that's what makes election night so electrifying.

Are you still a Lib Dem activist Barry? What do you think of the Adrian Vs Nick Bye proposal? - you don't say in your post.

Bye Vs Sanders, our very own Boris and Ken show.

A public school toff facing off a communist throwback

So why are the LIb Dems advertising in the Bayview newspaper for a mayoral candidate?

ADVERTISING for a mayoral candidate?

Marcus is right, then, they can't find anyone to do it!

The libs will suffer in Torbay as we have suffered in Scotland. Ever since we so forcefully opposed devolution we have been crippled there and the Liberals have made the same mistake.

"ok" the voters will say, "you hate the mayoral system so much, why are you trying to persuade us to elect a Lib Dem one..."

It's not a logical argument but its what voters think.

Even though I think Mr Bye has been a disappointment ( so far at least) he is certain to win because ther won't be any serious opposition.