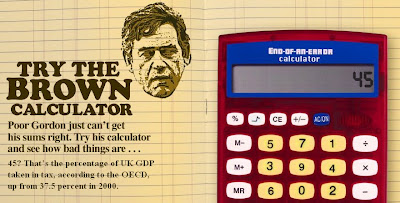 More of the same from Gordon the Timid....

I am still eagerly anticipating the 'raft of initiatives' designed to relaunch Gordons premiership once again, so far I am underwhelmed.

Free internet for kids and free theatre tickets for teenagers - all very nice but like free bus travel for pensioners it is a pathetic 'fiddle while Rome burns' type initiative.

And anyway, some kids; some teenagers and lots of pensioners don't need anything free from the Government being wealthy or living in wealthy homes.

Wouldn't it make more sense - especially when the Government itself is short of a bob or two - to give those in need some proper help - especially those seriously poor children, single parents and old people in the bottom 10% of income brackets whose real living standards have fallen drastically in recent months, and leave the better off to look after themselves?
Like many people fortunate enough to still be able to make ends meet I'd far rather pay my taxes to help those genuinely in need of a helping hand rather than finance silly universal freebies and pointless political gestures.

As the Government money runs out it's interesting to learn how just much Labour have had off us all recently where it's all gone. Fun to play with the Gordon Calculater supplied by the Taxpayers Alliance, click on the picture if you fancy trying to make Gordons sums add up!

Hah! What do you say now Mr Fat Cat Managment consultant? The PM has come up with some intiatives and is at least a genuine believer in a fairer society. More than those money grabbing consultant/trader types. Oooh I forgot, you are a consultant, aren't you?

Bet you drive a gas guzzler car to go with your ego!

I bet my alter ego will have lots to say about the PM's speech. Might even make him vote for the Scots Bore.

Lets face it the Lib Dem relevance to national politics is about as important as New Zealand is to the world balance of power.

BTW, you think I could vote for that supine NuLab apologist David Pedrick-Friend? Heck, I might even prefer even Marcus to him ;-)

Everything DPF writes sound like it is cut and pasted from crib sheets issued by Labour HQ and is entirely divorced from reality.

*Personally* speaking nationally *I'd * traditionally prefer Labour to the Tories, as my politics are left-of-centre, which will hardly come as a surprise to you. But these days the two big parties agree on so much that I am becoming equally opposed to both !

Hang on, you can't say that! Are you proposing to abnegate your democratic responsiblity and not vote at all?

I once asked a leading - almost dead and now a peer of the realm (aren't they all?) - why not make voting compulsory?

His reply? Bizarrely he prefereed the status quo as the other parties supporters were more likely to stay at home if disgruntled.Making voting compulsory would force em to support the opposition,he reasoned, thereby making life more difficult for his own lot!!!

Obviously as a politician he couldn't see that someone could reasonably change their voting pattern in order to make a change for the supposed better.

I hope you won't fall into the trap of being too curmudgeonly, alter ego, not to appreciate the benefit of voting. Better men than I have spilt blood to preserve our ability to vote.

INBW, of course I am going to vote ! I have voted in every local, national and European election I have been eligible to participate in. I see it as my duty in view of the struggle endured by others to attain universal voting.

To clarify my previous post : I said typically I'd personally prefer Labour to Tory govts, but I'd much prefer a Lib Dem led administration to both !

As a Liberal I clearly can't agree with compulsory voting !

I'll be voting at the next GE for the Lib Dems, as I have done at all recent elections ! My disagreements with the Lib Dems are only ones of emphases and nuance and there's more I can positively agree with in their 'Make It Happen' policy statement than anything offered by other parties.

However, traditionally I try to follow events in the Labour, Green, continuing [rump] Liberal parties too, in order to see what they are offering in response to the Conservatives and conservatism.