The news on the economy continues to be pretty gloomy with another slew of reports out showing the speed of decline in economic activity in Britain accelerating.

The pound has sunk as of today to around €1.13 and a currency trader friend of mine is saying that he expects to see parity with the Pound/Euro at some point in 2009.

The Government have made their rescue plans on projections that this recession is going to be very short and the economy will quickly return to fast growth in the back end of 2009. This is called a V shape recession (reflecting the shape the chart will be) and is a scenario widely dismissed by virtually all economic think tanks, research groups, and most other Governments. Their consensus view about the UK is for a U shaped recession, a period of fall, followed by a series of quarters of zero growth followed by an evential climb back to the long term average of about 2% growth year on year.

The most pessimistic observers feel that we are in for an L shaped recession, a sharp downturn followed by a very long period of flat economic activity; possibly for as long as a decade or more; this is what happened in Japan in the late 1980's when their totally overheated economy bust and it took twelve years of low or no growth to slowly unravel the towering mountains of debt that private individuals, banks and businesses had run up to buy inflated assets that were now nearly worthless. This slump included a period when base rates fell to a minus figure, in other words you got paid to borrow money and banks effectively charged you for depositing money with them (it still didn't work, today asset prices in Japan are still below the levels in 1989; the stock market is still at a quarter of it's pre bust levels). 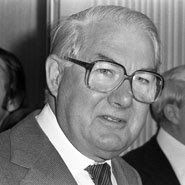 My own view is that this recession will be 'W' shaped; a 'double dip'. The last period of W shaped recessions was the 1970's when it was almost a permanent time of either boom or bust. W shaped recesssions happen when the 'cure' for the downturn unleashes other unfortunate consequences that mean a quick lapse back into recession.

During the 1960's and 1970's the problem was a chronic capacity shortage in the supply side economy. Governments would stoke up a 'dash for growth' of economic stimuli - tax cuts, spending pledges and government borrowing to 'kickstart' the economy - usually ahead of an election (sounds familiar, doesn't it?). This would lead very quickly to shortages, of goods to buy, property and other assets, leading to almost instant inflation and ballooning wage demands, which in turn would provoke an rapid unwinding of the stimuli, followed by a sudden lapse back into recession, often accompanied by a sterling crisis.

This combination of stagnation and inflation (stagflation) creates long periods when interest rates were lower than the inflation rate, meaning that borrowing money was almost free. This was a disaster for many people who had accumilated savings for their old age, their money became worth less and the income from it was not enough to live on.

It took twenty years of painful restructuring of the economy to cure this disease. Although credited (or blamed, depending on your view) on Mrs Thatcher the beginning of the turnaround was some fiscal discipline on public spending put into place by Jim Callaghan and Dennis Healy after having had their hands tied by the terms of our rescue loan from the IMF.

Gordon Brown seems determined to turn the clock back to the 1970's. His 'fiscal simulus' will create a short-term boost to consumer spending and may well create the impression that the recession is over during the second half of next year. But in creating trillions of new pounds and dumping them into the economy there will be a rapid, indeed I think a drastic, rise in inflation; (the pound in all our pockets is going to become worth a lot less and therefore people will demand a lot more of them for the same goods) and we will soon be facing rising interest rates, rising taxes and more expensive imports which will tip the economy back into bust almost as soon as it gets going again.

The cure for the patient is going to be more damaging than the disease.