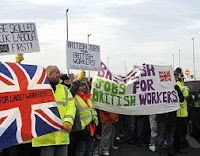 Politicians - well, all serious politicians at any rate, know that have a duty to consider very carefully the implications of what they say to the audience that is going to hear them.

Although politicians suffer from the (entirely healthy, in my view) mistrust from the public at large the fact is that people still look to them for leadership. With the demise of other institutions such as the church and trade unions, this may be because there isn't anyone else; but whatever the reason, it's a responsibility that most senior politicians take very seriously.

And the reason is simple. If a community leader says 'British jobs for British workers' (or indeed, closer to home, 'we don't want to turn Torbay into a jobs agency for Eastern Europeans'...) then there is a danger that it will become accepted behaviour for everyone else to say it, too.

Now when things are going well and there are enough jobs for everyone you might get away with it, but when there is a rising jobs crisis and growing feelings of financial insecurity you have a formula for victimising anyone who is not 'British' and who happens to have a job. And as we know from previous tragic human history, these feelings of resentment can get out of hand very quickly.

So if any community leader legitimises, or appears to legitimise any form of predjudice he is either acting extremely foolishly or worse, calculating to benefit electorally.

I warned that this could be a problem when our own MP made his statement last year that he didn't want to see Torbay creating jobs for migrants and I and many others warned Gordon Brown about his Conference boast about 'British jobs for British workers' would lead to disaster.

The scenes from power stations around the country are proof of what happens when politicians forget to think before putting their brains into gear. I only hope that this particular snowball is stopped in it's tracks, before it becomes an avalanche.