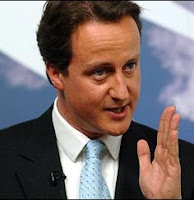 A warning to capitalists.
David Cameron made a very interesting speech this week. The press reported how he has apologised for the Conservatives failing to spot the potential disaster of the credit crunch in what many pundits judged to be a sideswipe at Brown who has pointedly refused to apologise for his part in the banks downfall.
Political ploy or not there were some very interesting statements in his speech which need to be noted, not least by market liberals and free market fans like my good self.
He admitted that a "cosy economic consensus" shared by the main parties had allowed the rise of risky lending, record borrowing and poor regulation.
"Of course I'm sorry that we have got some things wrong, we were right to call time on government debt but should we have said more about banking debt and corporate debt? Yes," he said. "Actually saying sorry is the easy bit. The difficult bit is for politicians to look back and say, 'Right, where did I go wrong?'"
"We need to recognise that our economy, as well as our society, is broken - and we should have said so sooner. But if we're honest, we must also recognise that some of our economic difficulties today relate not only to what has happened in the last ten years, but also to certain fundamental weaknesses that have been there for decades."
In a speech to the British Chamber of Commerce, he said that the next government needed to "make a clean break" with the policies of the past. He said that while his party had flagged up rising public sector debt, it "could have warned more" over the mounting debts of banks.
This could have been some clever political positioning but I think it is much, much more important than that.
The Conservative Party was a willing partner in the post-war left of centre consensus that meant slowly growing public spending as a percentage of the economy, State ownership of key industries, Government support for manufacturing industry, including hands-on interference over matters like factory locations, a commitment to full employment and close control by the Government over exchange rates, incomes and prices.
The spell was broken in 1974 when Kieth Joseph - a leading member of the party, had a Damascene conversion and said he repented of his role in government, claiming in April 1974 that, at the age of 56, he had only just become a true Conservative. He regretted his participation in the Heath government's introduction of statutory controls on incomes and prices and other measures which weakened the market economy.
His at the time very radical thinking set in motion what we now call 'Thatcherism' - and it's illegitimate offspring 'New Labour' - which has become the philosphy of letting markets and free enterprise set the terms, and repositioning our Government to simply react to economic needs rather than to drive them.
Critics on all sides of the political divide have claimed that unfettered capitalism is a formula for disaster. They have never agreed that the unprecedented period of growing prosperity that this change released was a benefit worth having, if the cost is social inequality. On the Tory benches these pragmatic people used to be called 'the Wets' the respectable term is 'One Nation Tories' named after Macmillans 1959 election manifesto "One Nation". Having been in the driving seat of the Party since the 1930's they were usurped by the far more idealogically driven followers of Keith Joseph which included Mrs Thatcher, after the failure of Ted heath in 1974.
David Cameron is a politician who believes that the best policy is the one that works, he represents a return to a more pragmatic, less idealogical era in the Conservative Party when the Government has an obligation to look after all citizens.
I detect a real move back to a more interventionalist Government whoever wins the next election and I suspect that as Prime Minister David Cameron might do things that will make some free marketeers blood boil.

All well and good, and I think you are spot on about Camersons speech last week. How are you, a total free market fan, going to cope with a leader who you don't agree with?

Hmmm, are you going to do a U-turn? Or are you prefering the phrase of your esteemed ousted leader - i.e. You're not for turning?

Time, I think, for you to show us your human side, if you have one.

Blimey, the tories going all goey cenre-ist? You'll be joining your cousin and my Not- Relation and espousing good deeds and the bilbe next.

I think the totally hands-off approach is a bit of a myth. All the talk of unfettered capitalism is tosh, frankly> There is no legal commercial activity that I can think of that is not very heavily regulated, monitored and controlled indeed.

I don't think any Government can or should interfere in the ability of businesses and individuals to buy, sell, deal and speculate their own possesions as they see fit, for instance, and I never will.

What I do think Government can do and in future will probably have to do, is make it worthwhile for businesses to take a longer term view; something perfectly easily done through the tax system, so that perhaps they have interests more in line with society at large and make their riches from building proper businesses rather than simply speculating.

Critics on all sides of the political divide have claimed that unfettered capitalism is a formula for disaster says Marcus.

What you should have said was that the Thatcherite consensus, followed by NuLab, in part, as well as their Tory predecessors, leave us where we are today. But a Tory attacking capitalism and capitalists is a bit like Ian Paisley rejecting the Bible - a very unconvincing line to peddle.

In fairness, Marcus you are right in one respect, we don't have a genuine unfettered free market system. Recognising the weaknesses and failures of the market, and intervening in such circumstances, are as essential as having open and competitive markets that meet consumer needs in the first place.

Marcus I haven't heard you push this line of argument before, or do you have to wait for 'Dave's' latest political insights before rushing to print ? Frankly, it sounds like more 'mood music' to convince the unconvinced that the Tories have changed and are no longer the 'nasty party'.

In short, an bizzare attempt at a headline grabbing speech by Cameron in my view - that is from the real Barrie Wood !!

Any comment from you on your party's desperate search for new allies in Europe following the belated departure from the EPP ? A commitment that took Dave C 4 years to realise at that !

It looks like The Tories are being linked with some real 'headbanger' friends in the EU Parliament. Are you happy with this ? Which parties do you think the Tories should ally with ?