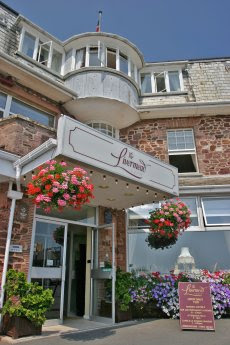 With all the fuss over expenses for MP's at the moment I am meeting lots of people who imagine I am somehow on the political payroll as well. This is not the case, as a PPC I am selected in advance to fight the next election whenever it comes, but in every other way I am just an ordinary volunteer activist so I have to fit the politics in with earning a living - just like most people.

At the moment I am working in Essex for a client and this means a 4.00am start on a Monday morning and I don't come home again until tennish on Thursday. This has meant that all the political activity that I need to do has to be packed into the remaining three days.

I think the staff at the fabulous Livermead House Hotel must be sick of the sight of me, having attended functions there on both Friday and Saturday evening this weekend.

On Friday we had our local Conservative Association AGM, which was surprisingly chirpy, for the first time in a long time we had raised a tiny bit more than we spent, and not only that we have spent a record-breaking amount on campaigning this year, we printed, published and distributed over 150,000 pieces of literature and surveyed over 20,000 homes in 2008 - which is the highest figure that we have on record. Membership is growing again, too, in spite of the minimim membership fee being £25 (we have a very successful 'friend of Torbay Conservatives' scheme available for a minimum donation of £1 but these numbers are not included in the official memership statistics).

Saturday night was the annual black-tie dinner for the Western Region Conservative Clubs Council. Many people think Conservative Clubs are the same as the Conservative Party but they are an entirely independent organisation (members of Conservative clubs are not members of the Party) although it shares the purpose of helping elect a Conservative Government and they donate many thousands to the party locally and nationally.

Clubs are not political and their members, though supportive, join to enjoy good company and a warm welcome, and not too much politics. Accordingly the dinner was a social affair and the fine speech by the Rt Hon Ann Widdecombe was entertaining and unplifting. My wife Karen was also glowing -and more than usual by the end of the evening as one of the speakers announced that he thought she was not only beautiful and clever, but that she was the secret weapon that would assure our victory whenever the election comes - and he is probably right.

Coming on the back of two days of door-to-door canvassing in hilly Wellswood and after an intense work week in which I have travelled almost a thousand miles I must confess to being very tired by the end of dinner. How welcome it has been therefore, having such fabulous weather today. We have spent the afternoon just relaxing in the garden, drinking in the view, and reminding ourselves how lucky we are.