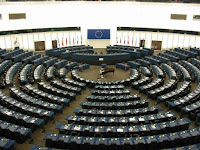 This is how 'democracy' works in the European Parliament.

Since becoming leader in 2005 David Cameron has stuck to the decision he made at the time to pull our MEP's out of the centre-right European Peoples Party coalition in Europe.

The EPP is a convenient grouping for Conservatives, the largest (and therefore controlling) coalition is made up of the right and centre right parties of all the main EU states like France and Germany, most of whom are currently running Government in their own countries. You would imagine that Conservatives would share much with them; and by and large in national politics we do. However a founding and central principle of the EPP is a commitment to ever closer European Union leading to a single, federal state. David Cameron felt that remaining in the EPP was incompatible with our party's belief in decentralised Government and an EU made up of independent nation states co-operating for mutual benefit so he declared that unless that part of the EPP's constitution could be changed, we would be leaving.

The EU are, frankly, terrified of the implications of this. At the moment virtually every mainstream political grouping in the EU is pro-federal. The one thing that the European Parliament never says when facing a new piece of legislation is "actually is this a power that we should give back to the nation states" because none of the groupings oppose the march to centralise power in Strasbourg and Brussels.

On our own there is little that British Conservatives can do. However many in Europe recognise that their own polulations are heavily split over the direction the EU is taking. In France and Germany significant minorities of the population oppose greater integration but their views are not being represented by their mainstream political elite. The fear amongst the European political class is that if Cameron goes ahead there will be a large number of MEP's from all over Europe and spanning the political spectrum, who may be sympathetic and tempted to join the fledgeling group eventually creating a proper 'opposition' in their midst to the relentless drive to centralise power.

So everything is being done to prevent the Cameron project. Firstly there were the scare stories about some of the initial potential partner parties being 'extremists' - when that didn't work they changed the rules. Standing orders requiring politicians from six countries to be in a grouping for it to qualify for official recognition were upped to seven as soon as Hague found six partners, for instance.

Now we read, according to press reports, that even this may not be enough. The Observer had this yesterday:

Leading figures in the EU assembly said he would not be allowed to form the group unless he could show that its members had a deep political "affinity" and shared the same basic principles. Martin Schulz, chairman of the socialist group in the parliament made clear Cameron could not expect to cobble together a group of disparate rightwingers and claim its members were broadly of like mind in order to secure group status. "We will be looking carefully at the formation of this group. It is very early and I do not have a clear view as to what they will do. But the contraditions on the right wing are obvious."

So never mind that democratically elected politicians want to form a group of their own. Consensus politics obviously means in Europe that unless there is a consensus amongst the cosy cartel already there to 'let you' form a new group or do something new you will 'not be allowed to' go ahead and do it.

And people wonder why we get frustrated at the lack of democracy in Europe!

Trust me, i have studied EU politics at University, and it goes way beyond this. The democratic deficit as its called is the last thing on these people's minds. They would rather concentrate on gaining more and more power, than solving the democratic issues within the parliament, commission and council. One of the many reasons why i am anti-EU.