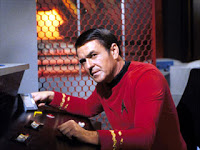 "Its worse than I thought, Captain"

The Times has this tomorrow:

"The economy slumped at its fastest pace for 50 years in the first quarter, plummeting by 2.4 per cent, according to revised figures released by the Office for National Statistics yesterday. This is far worse than previous estimates which had showed an already savage 1.9 per cent decline. "

It might be worse than the Treasury thought, but not to those of us operating in the real world.

My business is executive recruitment, we manage jobs in the £50-£150,000 salary range. On-an-off I can trace the history of my firm back to 1964 so we have plenty of other recession experience to fall back on.

The number of speculative unsolicited CV’s sent to us has gone up eightfold in the last 18 months. Traffic to my website pages offering ‘redundancy advice’ is up 288% on this time last year, which was already up 200% on the year before.

We have become blase about listed companies going bust recently, but until last year it had never happened to us. I can think of at least four of my own clients -all major plc’s- that we used to do business with who have gone bankrupt last year alone, and I know of several others in retail and the pub/leisure sector who are a gnats whisker from closure.

One of my biggest clients trades in residual (unsold) FMCG stocks. They buy all the unsold batteries and cleaning materials and sweets and crisps that manufacturers made but can’t sell, and sell them on to bargain stores. Their business is dependent on a supply of excess stock being available. Last year was all all time record (they have been going since the war) because manufacturers had record unsold stocks; they expected a slowing of availability this year as manufacturers slashed production while demand levelled.

Manufacturers have indeed slashed production, as we know by the unemployment numbers, but very worryingly for the economy residual stocks are still piling up all over the place and my client is breaking new records week after week. This means only one thing, as fast as production is falling demand is falling faster.

New Labour have been the most nakedly partisan Government this country has ever had. They set out with a clear mission to stamp out the Conservatives forever and they damn near succeeded.

And now the strategy has failed they are operating a scorched earth policy in the vain hope of destroying anything and everything that could aid an incoming Conservative Government.

They are like the tenants from hell who having already wrecked the flat and stripped it's fittings when they were finally evicted stuck rotting fish under the floorboards to contaminate the place for years afterwards.

Kirk of the Enterprise said...

Yes and as the Govner of the Bank of England has already said "I just cannae give ye any more, Cap'n"