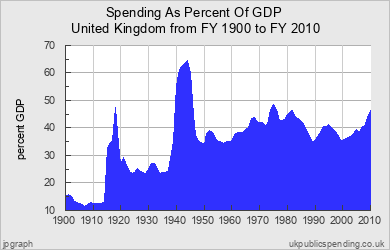 
I am grateful to the UK Public Spending.com website ( here ) for supplying this revealing chart.

The Government is on course to control more than half the economy by the end of 2011.

Government spending as a percentage of the total economy has only gone beyond 50% during wars. Even during the disasterous 1970's the ratio remained (just) below the half way mark.
Why is this important? The long-term fastest growing economies in the world are all those with the lowest percentage of Government spending in the economy, places like China (27%) and America (37%). The long term low growth countries have the highest general levels of taxation and Government spending, culminating in the Soviet Empire which collapsed through economic failure. Also the lowest growth ( or most recession-prone) periods in our own history have been when tax-and-spend is at it's highest.

Non-Government economic activity is what drives growth in an economy because private economic activity creates profit, thus creating larger enterprises making and selling more goods, employing more people who then buy yet more goods with the money thay have earned.

As the Government spends more the productive economy is squeezed, and with a smaller pool of profit to create future economic growth from the potential for growth is reduced; as we found to our cost during the 1960's and 70's.

A way of illustrating this is to compare a private motorway with a Government one. When roads are built as business ventures on a pay per mile basis a successful (busy) motorway like the M6 extension makes it's owners lots of money and they have both a huge incentive and the income to finance improvements to increase traffic flows and revenue. On the other hand when the Government owns a busy road there is no profit and funding for growth is not created, in fact the reverse happens- more demand creates wear and tear problems and we soon end up with the M25.

When British Rail was wholly state owned in the 1970's Sir Peter Parker, it's chairman, acknowledged that when the trains got too busy his only solution was to increase fares to 'put people off' because new trains would have cost the Government millions that it didn't have.

But there is more bad news, Government spending is also inflationary. The countries with the highest long-run average inflation rates tend to have the highest levels of public expenditure and Government debt.

When the Government spends more it creates other forces that create inflation and suppress future economic growth. When the Government expands spending it goes into competition with the private economy, for example it competes for labour - driving up wage costs. And because Governments run on debt they also compete for money - in borrowing more of the finite money supply they are reducing the capital available to private business, constraining their growth and eventually pushing up interest rates.

The Economist Keynes believed that temporary Government intervention in a recession could prevent deflation and mass unemployment. His theories were born out of the Depression but economists remain split on whether his theories actually work. It is claimed that Keynsian policies followed by British Governments of all colours after the war led to chronic inflation and our relative economic decline until Mrs Thatcher turned her back on his theories in 1979. His fellow economist and critic Hayek claimed that what starts as temporary governmental fixes usually become permanent and expanding government programs and that keeping taxes low and Government spending moderate were the key to expanding economies. History -and the chart above - prove Hayek to be right.

Labour are claiming that their trillions in spending is a 'return to Keynes' and will prevent a recession and unemployment - I believe the reverse, that a deep but short recession has been swapped for a prolonged period of economic instability, inflation and stagnation as the bloated public sector stifles the private sector and civil society.

It's time to dust off the flared trousers and the platform shoes, the 1970's are back.

Will voting for your lot really provide a way out? how can we afford to "protect" the NHS spending? What will be cut instead, bearing in mind we have an aging population will it be popular to radically cut state pensions etc?

Surely the only way is up at the moment? Higher taxes, higher unemployment and higher inflation? unemployment

I agree that prices, taxes and interest rates are all set to rise as the 'fiscal stimulus' runs out of steam. Unemployment is going to test new all-time highs in my view by the middle of next year, too.

This is not just because of Labour mis-management, the Western economies have been living on borrowed time (and borrowed money) ever since the emergence of China, India as major manufacturing bases.

We are at a crossroads in my view. On the one hand Labour will maintain spending, increase taxes and increase the power and reach of the state, trying to maintain things as they have been. This would make a return to the controlled, planned and largely state controlled high tax economy of the 1970's - which - with exchange controls, and prices and incomes controls, they might possibly sustain for another five years or so before the burden of taxation created a total economic collapse as happened in the USSR and Zimbabwe.

On the other hand the Conservatives would cut spending and raise taxes by less and for a temporary period until the books are rebalanced, as we did in the 1979-1985 period. Cutting spending is going to be a necessity - but in the long term it will be a benefit as I hope my chart illustrates.

What we would then have - as last time - is a smaller but much fitter and modern business base to build a sustainable and long term growth economy on the back of.

If you look back to the last revolution in the 1979 change we lost industries like coal and steel that Labour had been keeping going with subsidies, but new high tech high skill industries like mobile telecoms and financial services more than replaced them in the economy.

We are overdue a similar revolution now; the highest tech businesses like aerospace, green energy and internet commerce will expand while traditional 'branch network' banking and other retailing will diminish; and routine manufacturing will continue to decline.

We cannot prevent changing consumer habits reshaping the jobs market, nor should we try.

What Government has to do is make sure there is help for the people who need it.