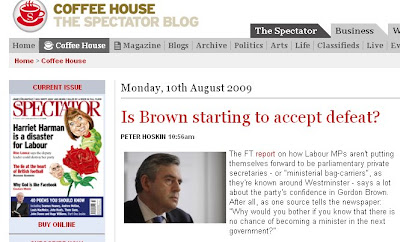 I don't believe it!

No, really. I dont believe it - this is a story that has done the rounds in hours today, a report that people close to Brown are saying that he has become resigned to losing the next election. This was sparked off by a report in todays FT concerning the lack of MP's prepared to come forward to replace the many parliamentary private secretaries who resigned this summer - something that would normally cause great irritation in camp Brown; but apparently not this time. The FT reports various sources giving a variety of reasons for this, one of which reads: "One Downing Street insider said the prime minister was more relaxed because he now realised that he was certain to lose the next election and was powerless to defy political gravity.""

You can't access the FT story without paying a subscription but the Spectator Coffee House Blog has a second-hand report on it here.

The speculation is running that Brown has come to recognise the futility of his situation and that defeat is inevetable.

I simply don't think this is credible on two counts.
Firstly, to accept the possibility of defeat would give Brown a level of humility that is completely absent from his personality - I could imagine Jim Callaghan being resigned to defeat in this way - even John Major; but Gordon Brown?
Secondly it would suggest that Gordon Brown was reasonably in touch with public opinion such that he knew the level of anger and mistrust and the appetite for change that exists in the country at large, something that is in my view utterly inconceivable. Gordon Brown was not exactly a man-of-the -people type politician to begin with and for twenty five years has gone out of his way to avoid meeting the people who elected him. His fascinating biography by Tom Bower also demonstrated that he prefers to keep in touch with the public via a small cabal of loyal acolytes who filter public opinion to make sure what the Leader hears, he likes.

As I have said before, far from accepting defeat Gordon Brown thinks that he is poised for a historic victory based on the grateful hoardes thanking him for a heroic turnaround in the World Economy that he, Gordon mastered last year.

He may well be the only person alive who thinks this, but he really and truly believes it.

Something you should read ...