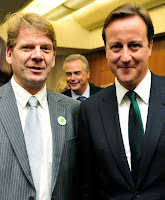 Three different polls have come out in the last 24 hours all showing a very big lead for my mate Dave*.

The three polls came from different organisations, interestingly all using their own techniques (the days when they all just used to ask 1000 people 'who will you vote for' are long gone, now they use the internet, telephone canvassing and a lot of complicated correction formula's to represent a proper cross section of people).

A regional analysis by MORI said that in just England the figures are Conservatives 47, Labour 24 and the Lib Dems 21.

At this point in the electoral cycle it is becoming hard to see how the Labour party can pull things back.

Even if they change leader (which they won't) and even if they had a superstar replacement in the wings (they don't) it is an almost unbridgeable gap to claw back enough support to win outright.

Why has Labour support dropped back? Only a week ago the papers were talking about the gap closing, a Labour fightback and the prospect of them winning enough support to deprive the Conservatives of a working majority - even of Labour still being the largest party in a hung parliament.

The reason is simple. The public famously hate the prospect of a hung parliament, as soon as it looks likely or is openly talked about Labours vote share plunges. This is very bad news for them and suggests that whatever they do the public mind is made up.
They want out of this Labour Government.

* Honesty Alert. Dave is not actually my mate. We have shared a beer, but only because he got stuck with me in Torbay for hours the last time he came here when his helicopter couldn't take off.

I am away from tomorrow for a week. If I get time to update the Blog I will - but it will be via my Iphone so expect even more errors than usual!!

Marcus Wood you are a disasterin

Everyone should know that Marcus Wood is a selfish, self interested man who cares about no one but himself and is only interested in getting elected. A typical heartless Tory. The worst possible type of would be politician. He has no compassion for those who are not as priveleged as he himself, in his huge Torquay house. Please don't vote for this man

Anon of 3.07pm: perhaps you would care to share with us the evidence of your statements. Note: a huge (or even massive) house doesn't count as evidence, unless he keeps people locked up in its cellar.

I wish I did have 'a huge Torquay house' and so does my wife.