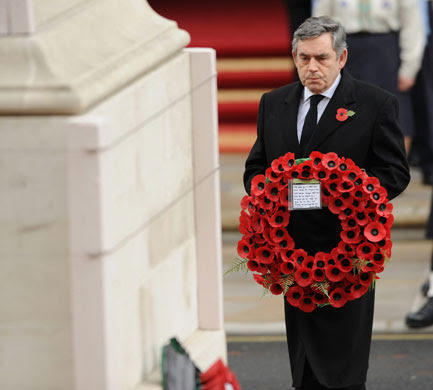 As usual I attended the rememberance day service in Torbay yesterday.

As usual it was a sobering moment.

While the service calls on God to give wisdom to our leaders and politicians we are standing in rememberance of the terrible aftermath of collective failure of wisdom which is modern warfare.

Most wars in modern times have been the result of a failure of leaders (often, on all sides) to lead wisely.

Even the Second World War, where we had a clear moral purpose and an urgent need to go to war to defend ourselves is a conflict that Winston Churchill thought could have, and should have been prevented. In his own memoir of WW11 written in 1947 (Volume 1 The Gathering Storm) , he makes clear that he felt that had the Western leaders shown more determination in the 1930's to oppose German re armament, and also resolve to ensure their own defence remained strong, Hitler would have not had the confidence or the military ability to set out on his deadly course.

Even then, had the leaders of Great Britain and France stood resolutely against his early incursions and aggressions it is highly likely that the world war could have been avoided.

But much more on every one's mind yesterday - and the reason the number of attendees was sharply up this year - is Afghanistan.

After so long it is hardly surprising that the public are confused and vague about just why our soldiers are there. The purported reason - that otherwise the streets of London will be awash with terrorists - not surprisingly fails to strike with people and the secondary reason, that the alternative is 'instability in the entire Middle East' prompts the question 'Just when was the Middle East stable to begin with?'

The conflict is hard for soldiers because the Labour Government have become so mistrusted by the public on this (mainly because of the mess that was the argument for going after Saddam and the whole WMD fiasco) that declarations by ministers that we need to stay are just not believed by even senior military people any more.

The Government need to establish with us all that we are not there simply as a fig-leaf to the Americans. We need to be reminded that being dragged into this conflict was not simply a knee-jerk revenge action caused by the 9/11 attacks but a properly though out strategic move to introduce democracy and in so doing hopefully eliminate Muslim extremism.

The snag is that even if we succeed in delivering elections the problem is not ended. Extremists flourish when democracy fails people. Leaving President Karsai in charge of Afghanistan looks increasingly about as sensible as leaving Leslie Phillips in charge of a girls boarding school sixth form.

When citizens think their politicians are corrupt, self interested, tribal and inept they can easily become attracted to the ideologue, the zealot and the bigots that spring up offering clear cut alternatives. One reason that the political and religeous extremists are flourishing is the collective disillusion with the honesty, integrity and wisdom of the existing, usually elected, politicians of many countries.

And that -very sadly- includes this one.

Which is why we urgently need to put our own political house in order.

Wow... Excellent dear, great post!! there is so information on this blog, keep posting like this so that i can come back every day for some new topic...
High fashion Ladies wear Designer
for apparel fairs and for garment exporters
Thanks for sharing...

Ok, so I admit it, you've finally written a decent post. Probably because you've left offf nonsensically bashing the Liberals for once and specifically our MP.

Are you targeting the Pink Pound Mr Wood? Finally your tasted in lurid jackets is paying off....surely the Culture Ministry beckons for you now.