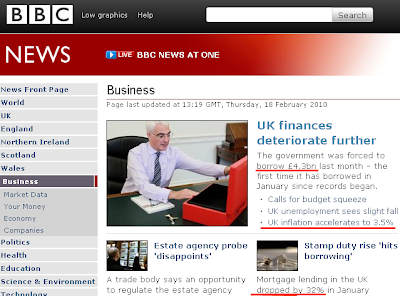 Will the growing signs of a 'double dip' bring an early election?
The economic news is deteriorating rapidly. Aside from the short-lived 0.1% 'growth' story earlier in the month the economic news has been relentlessly gloomy so far this year with the outlook for jobs, house prices, inflation, economic growth, the exchange rate, Government borrowing and interests rates all turning sharply negative in recent days.
Especially worrying are the Government borrowing numbers for January which reveal that we needed to borrow £4bn in a month that normally has the Governments coffers overflowing. The BBC reports "January typically brings the government a large income from tax receipts, giving it a budget surplus and allowing it to repay some of its debts. But this year tax receipts were significantly lower than expected, the ONS said, with both income tax and capital gains tax income falling sharply. Tax receipts dropped 11.8% compared with January last year, when the government was able to repay £5.3bn."
This is the equivalent of a seaside holiday hotel finding it is making a loss during August.
For most of 2009 the Government were printing their own money to spend, but that process has ended and from now on the Government has to persuade real investors to lend it the mountain of cash it needs to pay the salaries and benefits on which millions of Britons depend.
Borrowing costs will almost certainly rise, very sharply. Unless the markets are convinced that the Government has a plan to deal with its budget crisis even this might not be enough.
That is why speculation is rising again that the Government may not wait for the news to get worse but instead cut and run for the election in March. An early election means that the Budget could be deferred and the election would happen before the 2010 1st Quarter economic figures are published in April (Many analysts believe that the Q1 figures will be more disappointing than the 0.1% 2009 Q4 figure published last month, suggesting either no growth or a tip back into recession).
We cannot go on like this, playing politics while the real economy teeters is the last straw. It is more important than ever that the Government delivers a credible plan for jobs and growth. Labour should take the advice of leading economists and Sir Richard Branson and adopt our plan to tackle the deficit and ensure stable recovery. Instead, Labour are pursuing a path that will undermine confidence, threaten higher interest rates and mortgage rates and put the recovery at risk.

Marcus, as it is now Sunday 28 Feb, and you haven't updated this for 10 days, I can only assume you're losing the will to fight.

I can really understand that: you've been treated with almost contempt, both nationally (eg Grayling making a 'special' trip just to inform us that, if the Tories get in, he still can't guarantee the by-pass we so desperately need) and locally (by the mayor and his bunglers at the town hall).

But Marcus has been a huge supporter of that buffoon Bye and his inept cabinet chums like Lewis, Carroll et al