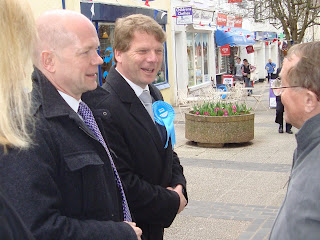 Another day, another Top Tory...

The second week of the campaign has brought with it two front bench visits and several walk-about campaign calls. On Monday we had Mark Francois, the Shadow Europe Minister with us, and I took him with us to meet residents living near Watcombe School and also to meet local businesses in the area.

Tuesday saw us in and around Goodrington shops, meeting local traders and residents and then today we were en-masse in Babbacombe and St Marychurch all day. We met shoppers in St Marychurch Precinct, and then we spent a lot of time with business owners and shopkeepers there; talking about the state of the economy and issues that affect them like business rates and the employment tax (otherwise known as employers N.I. contributions).

Shadow Foreign Secretary William Hague and Totnes Candidate Sarah Woolaston come along and in all we probably had nearly 50 supporters and activists in and around the whole area for the day.

We made a brief visit to the Conservative Club and then went on to Babbacombe shops to see people there.

There was time for a quick snack lunch at the local cafe (which was completely overwhelmed by the sudden arrival of such a large crowd - though everyone got tea and sandwiches in record time!) .

William and I met a very interesting resident who runs a language school, and she was very keen to make us aware of the potentially disastrous impact on her business of the clamp-down on student visas proposed in our manifesto. She made her case intelligently and reasonably to us both and we were left clear that any new law will need carefully drafting to protect the legitimate and very valuable foreign language teaching business.

Then there was some autograph signing, some press interviews and lots and lots of people to talk to and shake hands with (William Hague was drawing people to him like moths to a candle) with everyone saying 'Oooh my friends won't believe I have just met William Hague if I don't get a picture' we had several posed shots with passers by using their mobile phones to do as well.

I was delighted to hear from Sarah that she was inspired by my public pronouncement on foxhunting to join me, and she now becomes I think the second Conservative Candidate in the South West to rule out voting to support a repeal of the hunting ban.

And then it was time for him to go on to Newton Abbott.

All in all, a lot of fun and though I always knew he was popular, I was still amazed at just how big a popular draw William Hague is.