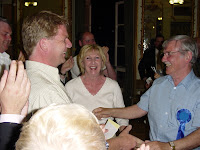 The end of the beginning?

This is a picture of the election of Kevin Carroll at a by election in 2004 which was a pivotal point in Torbay politics.

His victory -in a formerly safe Lib Dem ward- marked the first point at which the Conservatives in Torbay began a concerted and planned political fight back based on a proper alternative vision for Torbay rather than relying on the occasional 'get lucky' wins here and there.

The campaign that culminated in last nights resounding victory in Torbay was based on a determination to 'stop the rot' that has infected not just the fabric of Torbay itself but also the politics of the place.

The councillors on our side who won stood because they want to take Torbay back in the direction we know it needs to go in order be prosperous again; so the campaign was about the future of the bay; not the future of bay politicians. Others may have tried to personalise the campaign but we have stuck firmly to the issues and politics - and especially our vision for the future.

Fortunately the electorate appear to have noticed the lack of any alternative vision from the other parties, save a lot of campaigning about what they didn't want ('No' to a casino, 'No' to a hot air balloon, 'No' to any solution of Oldway, etc, etc). Simply campaigning with no purpose other than hanging on to power is seen through by the electorate.

Some outstanding talent has at last been sent to the Town Hall, people with track records of running successful businesses and organisations and there will be a much needed improvement in the quality of decisions and the level of scrutiny.

So last night is 'the end of the beginning' of the project to turn Torbay round.

Congratulations... and Now work hard and restore the Bay,

Sort out the Parking/warden stuff, clean up the street litter,

Empty bins WEEKLY, and above all LISTEN to the people.

Congratulations to your party on your decisive victory last night. Your brave pre-poll prediction was right after all ! But, so was my own tea-leaf reading regarding Ellacombe, sadly. Well done to Julien Parrott in beating both the Tories and myself there ! 1-1 methinks !

Having absolute control now the mayor has an entirely free hand, but I hope he learns from his mistakes to date, for the good of the bay.

Listen to residents as much as business interests, consult and take people with you and engage with councillors, including LD ones, irrespective of the cabinet make up. It will no longer do for Mayor bye to blame us for all the ills of the bay - and vice-versa for us !

From a LD perspective, I am encouraged that many of our disadvantaged areas (ala Watcombe, Hele, Ellacombe, Upton et al) still have SOME Lib Dem representation and the concerns of residents in such areas can be voiced through them.

Further, six to twelve months ago we were dead in the water and people were unremittingly hostile to us, this is no longer so. I'll admit we have work to do to restore our fortunes, but working all year around as we do, you can be sure of some vigorous contests ahead !

Finally a Conservative party boasting the Town Hall talents and egos and personalities of Bye, Carroll, Excell and Oliver should be 'interesting' to follow.

Very much feel for you Barry, having lost an election myself belive me I know how it feels!

I can honestly say I don't know why you didn't get in but being last on the ballot paper is never helpful, especially in local elections like this one where there are so many names to choose from.

I have already questioned the Lib dems campaign themes and I expect you will have a wash-up of your own; suffice to say I don't think hard working activists such as yourself have necessarily been that well served by some of the people at the top of your local party.

Anyone who has the commitment to stick their head above the parapet and have a go is to be applauded and I expect it won't be too long before you are back on the hustings again.

As to the council group, there is a sense of purpose and focus on the bigger picture that has been lacking in Bay local politics for a very long time; I am optimistic.

I'll be interested to hear how your inaugural group meeting goes on Tuesday. It'll be interesting to see if Kevin Carroll remains leader.

For our part, I'm glad our council group has chosen as leader the person who I believe unsettles Mayor Bye and his fellow Tories the most, namely Steve Darling.

I'll be back for sure, politics runs through my blood, as does my passion for the bay.

As for our 'wash up' obviously we'll see how that goes, but I do think we must not fall into the trap of being the anti-Bye party by default. We need to articulate our own themes as well as contest those of the mayor, where we differ.

Interestingly, I think UKIP (and even the loathsome) BNP took possibly more votes from us than you, contrary to perceived wisdom.

Barry, I agree that many of the votes that went to BNP and UKIP were yours, not ours. In fact we could see that from the split voting sheets.

Don't you think it's come to a pretty poor pass when people would rather vote for the BNP than you?

I should have thought your group might have considered that when they chose their leader.

Where we went wrong for so long was backing people with a track record of failure (IDS springs to mind!) and it looks like your lot are making the same mistake; first with Ming Campbell and now with your 'new' leader locally.

Instead of picking the person who has been running your political campaigns for these last few years I'd have thought if they wanted to change, they would have chosen someone new.

News that it will be no change in the Torbay Lib Dem camp has been warmly received on our side, I can tell you.

As ever we shall see. I'm not sure Mayor Bye will be so sanguine as you are about Steve Darling's election as LD leader!

And, as for the BNP vote, I would have thought that it should trouble all democrats and democratic parties.

Any vote for BNP instead of LD, of course that saddens me, but the fact they didn't give all their votes to the Tories or Labour either means we ALL need to be concerned.

A fair few voted Tory and BNP too sadly.

To see a party founded by a fascist and one that still draws upon racism and the politics of fear and loathing doing relatively well is a reflection on the failings of all mainstream parties, including yours.

Let us stand together on this and not try to score points !

Finally can you tell me how in the first 100 days of a Tory council the Tories intend to tackle the issue of teenage pregnancies. I ask as this was one of your party's specific election pledges !