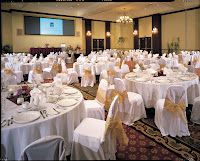 After the success of the Norman Tebbit dinner last year I decided to ask his Lordship who he might recommend as a future speaker, and he suggested his friend the novelist Frederick Forsyth.

Now Freddie is famously outspoken on everything from the Royal Family to Europe and I just couldn't wait to ask him along, luckily for us he readily agreed to help on the basis that any friend of Normans was OK by him, I think.

We sold out of the original tickets but very fortunately the Grand have 'stretchable' banqueting suites and nothing else on this Thursday so we have been able to enlarge the room and fit everyone in; so it will be the biggest dinner in Torbay since William Hague came here as leader and hopefully raise lots of money for my growing election fund.

I have a bottle of House of Commons whisky, personally signed by Lady Thatcher only last month, to auction off at the end of the evening along with several signed limited edition copies of Freddies latest book.

I am looking forward to a highly controversial evening, Freddie was also a leading supporter of David Davis' leadership bid and I am busting to find out what he has to say about his unexpected 'stand and fight' decision over civil liberties.

If you haven't already got a ticket you can go on the waiting list by calling the office on 01803 557753 - we have a table of ten (paid for) who have warned us they may have to cancel.