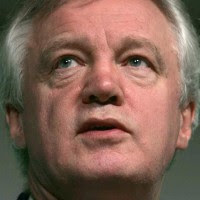 Blimey, they say a week is a long time in politics but this week seems like an age.

In a blur of politics it looks likely that by this weekend we will have a new law on it's way that says innocent British citizens can be locked up without charge, without even knowing why, for six weeks.

The Northern Irish will gain several hundred millions of taxpayers money for supporting the above.

Meanwhile the Southern Irish will have had the referendum that we were denied over the EU constitution, sorry, I mean treaty (and probably said 'No' to it).

House sales are down by a third since last year.

Another three businesses within walking distance of my house in Torquay have closed.

Oh yes, and the shadow home secretary has resigned his seat to fight an election on the erosion of our civil liberties.

I knew David Davis quite well 'before he was famous' and know him to be an exceptionally principled guy with talent; I didn't support him for the leadership because I preferred David Camerons style and politics.

I think David Davis is doing a rare and valuable service to the country in proving that politicians will take a stand on matters of principle. I agree with him, support him and would like to see him back in the Commons and on the front bench as soon as possible.