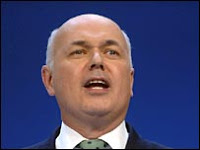 What could they possibly have in common?


It's really, really hard to think what these two men may have in common with one another.

One of them is an ex Guards officer and traditional Conservative MP, a devout Catholic who is in the history books for being one for the three shortest-serving Tory leaders ever. In fact he is the shortest serving Conservative opposition leader. His poll ratings got so bad that his political colleagues felt obliged to sack him after an unprecedented two years and two months in the job.

The other is the son of Scottish Presbyterian preacher who was first a left-wing student activist, then lifelong Labour MP, deputy to John Smith, architect of the New Labour project, Britains longest serving Chancellor of the Exchequer and now Prime Minister.

"Gordon Brown’s leadership standing has now fallen below that of Iain Duncan Smith during his short-lived and unhappy period as the Conservative Party leader, according to the latest Populus poll in The Times today.

The poll underlines the seriousness of Mr Brown’s position as he faces a knife-edge vote in the House of Commons tomorrow evening on extending pre-charge detention for terrorist suspects from 28 to 42 days."

According to Peter Riddell "Moreover, Mr Brown no longer enjoys the benefit of the doubt among voters. His leadership rating (on a 0 to 10 scale of very bad to very good) has fallen for the fifth time running, down from a peak of 5.49 last July to 3.9 now. This is lower than any of the other seven leaders of the main parties since the index was introduced five years ago. The previous low of 4.00 was for Mr Duncan Smith in 2003."

"Labour’s rating has fallen by four points since last month to 25 per cent, with the Conservatives up five points to 45 per cent. This is one of Labour’s worst poll ratings and the best Tory one since 1997. The Liberal Democrats are up one point at 20 per cent."

So perhaps in due course they may share another characteristic, as well as being the most unpopular leaders of their respective parties they may also both end up being the shortest-serving.

It's even stevens on the charm front for both of them as well.