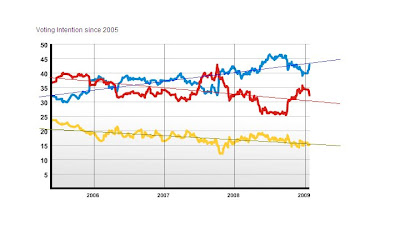 A fresh boost to Cameron (and me) from ICM, YouGov and Mori this week.

Three polls this weekend all showed a big boost for the Conservatives at the expense of labour and the Lib Dems; and proved that the much hyped Brown Bounce 2 is over.

If you only ever took your news from the BBC you could be forgiven for thinking that Labour had gone back into the lead over the credit crunch, whereas as the 'poll of polls' chart above from Anthony Wells UK Polling Report webside reveals at no point did Labour gain a lead - in fact they have been behind in the polls consistantly since the election that never was after Brown first took over at the back end of 2007.

During this time the BBC (Brown Broadcasting Corporation) have been parroting the Labour line that there was a poll lead for Gordon, but this was only in the subsiduary question asked by some pollsters "who do you trust to run the economy" where there was a short-lived preference for the Prime Minister during November and December.

However the trend lines are clear, with every passing month Labour and the Lib Dems are falling further behind and the Conservatives are steaming ahead in levels of public support. Interestingly the Lib Dem trend line almost exactly follows the Labour line suggesting that voters are punishing the Lib Dems in equal measure to Labour for the mess the country is in.

Which given their close views on everything from the Euro to tax is hardly surprising, I suppose.