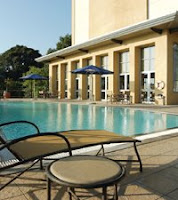 I have just got back from a short business trip to Johannasburg, a part of the world I have never been to before.

I was hugely impressed with the place, the people and the atmosphere; it is a city that seems at ease with itself, and as often turns out to be the case, feels a million miles away from the image given to us by the media.

There is huge inequality there, as is common throughout the world, but there isn't the kind of unsettling quality to it that you see in some other parts of Africa. The Government of SA really do seem to be trying to do the best for all their people - even the shanties are looking as if serious money is being invested to improve the properties and provide sanitation and electricty for everyone in the city.

I had long talks with people (S Africans are so friendly and open, it's hard not to get chatty with everyone you meet!) and the problems they do have ring strangely familiar. One of my drivers told me about the fact that millions of immigrants have flooded SA from other parts of Africa looking for work "lot's of our people are lazy" he said "so the Somali's come here and get the jobs because they are willing to work hard, and then our people say they are taking all the jobs, but there is work and money here if you are prepared to get up and do the work"

Johannasburg is a wealthy city which looks and feels very American, it's mostly low-rise and very wooded, with spread-out modern gated industrial and residential developments connected by big freeways interspersed with gigantic shopping malls. The only difference is that at most junctions there are scores of animated traders dicing with the cars hawking anything from sunglasses to clothing.

And as a European who grew up at a time that South Africa generally seemed to be a hotbed of racism and inequality I was expecting to see remnants of that today. I thought all the rich would be white and all the workers would be black. How wrong can you get!

I felt truly humbled and astonished at how comfortably the people live with each other today, no resentment on either side, white and black South Africans seem utterly passionate about their shared country.

Quite puts some of our local feuds into perspective, really.