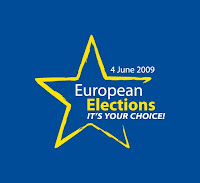 What can we expect on Thursday?
Will we be celebrating or commiserating?

The European elections loom this Thursday and we have been busy for weeks canvassing for votes.

Have we been 'stirring up apathy' as Willie Whitelaw once said in a famous gaffe?

I think the appetite to vote at all for the European Elections is very low indeed. It's never a particularily passionate election and since the PR system was introduced, breaking the remaining link between the voter and candidate, it has become even more uninteresting.

This time we have the added disincentive of the expenses scandal, which has meant that votes are currently simply turned off all politicians. We have had a good team out canvassing and when we talk about national politics and the next General Election we are getting an exceptionally good response, but if the conversation is based on the Euro's (and for obvious reasons at the moment it is) we get mostly apathy.

To be honest that is hardly suprising. The European Parliament seems completely irrelevent to most voters. It's powers are limited, it's debates boring and the place hardly ever makes the news, and when it does it usually falls into the 'Euro madness/straight banana' category.

The only people who seem to get excited about the EU elections are -bizarrely- anti EU campaigners like UKIP. Why on earth do people who oppose Britain being in the EU want to spend millions of pounds and hours of campaign effort to get elected to it's Parliament?

Even the count is a huge washout. As a political activist finally getting to the count is one of the best bits, seeing the slow but steady emergence of the result - the judgement of your work - is exciting and invigorating even if you lose; but the Euro count is a complete let down.

Firstly it doesn't happen after the election on Thursday, but on Sunday when the rest of Europe have finished their voting, and then the 'result' is not announced here in Torbay but a hundred and fifty miles away in Bournemouth by TV link, meaning that all that has happened locally is an administrative function.

And in the end most of us who are there just don't care what the result is, the PR electoral system uses a complicated mathematical formula that means, unless there is a revolution, the outcome is a certainty, the winners and losers long ago pre-determined by their rankings in their own party hierarchies.

I suspect for the record that UKIP will do well on a dismal turn out. I doubt either as a vote share or vote number they will come close to the 12,000 or so they racked up in Torbay in 2004 but then I don't think we will come close to our 2004 figure either.

The Lib Dems locally and Labour nationally will once again be humiliated and once again dismiss their poor showing as irrelevant - citing previous years when they did abysmally at the Euro's and then went on to win the General Election that followed.

The real political action in Devon this week is on the County Council side, where Conservatives are hoping to take control of Devon, but we in Torbay are standing on the touchline of that particular battle.

Some might sat right now the biggest political bunfight right now is within the (again) split Tory council group !!

As for reform at Westminster, what you call boring, I see in STV a system offering electors not only a choice between parties, but choices between candidates of the same party. Every vote actually counts and shapes the outcome locally. Further, this avoids having members elected from party lists, which puts power in the hands of the party and not the electorate - never a great idea.


Of course, this would lessen the ability to try to 'buy' seats, as currently happens now with the Belize based Lord Ashcroft pumping huge sums into marginal seats. It also lessens the prospect of negative voting. That is voting to keep another party out, rather casting a positive vote for a party you support as first choice. That happens in a good number of constituencies across the UK with the FPTP system. But the 'fearless' reforming Tory that is Marcus Wood calls 'fair votes' boring ! Hmmm...


Cameron too has nothing to say on an elected second chamber, the limiting of party political spending / individual donations. He still prefers to be the party of 'big money'. Should electoral contests be a battle of political ideas or a contest between parties with the biggest advertising budgets?

Of course, on the royal prerogative and fixed term parliaments I can agree with DC. But Cameron's 'reforms' would be ones to suit the needs of his party and not necessarily those needed by a politically disaffected country.

I agree too on your analysis of UKIP. Their last EU intake was hardly a band of morally and financially upright citizens was it ? However, I still wait for you Marcus to say who it is you think your party can align with in the EU following the departure from the EPP. I'll not be be too critical of you on this as I'm not sure Haugue and Cameron really know as yet. It will, however, put you on the fringes of influence in Brussels.

It looks like the Lib Dems are more in tune with the voters than you are Marcus !

you-gov, schmoo-gov. I get their questionnaires, and the answers I give (mostly however, I seem to never be their target demographic, so I suspect these things are just as dodgy as making it all up entirely, meaning that they completely skew the demographic they want on a poll - ie: ask registered Libdem voters about Tory policy) depend on, for example, the mood I'm in, the letters page of the HE, or the latest annoying post from, say, the likes of regular commenters on this site.

However, Marcus, you simply have got to stamp down hard on the mostly useless bunch of Tories currently in Torbay Town Hall if you want to do at all well in the Autumn (we can hope!) general election. This nonsense with Tito ... filling all the posts with masons, or with people who are either too ill to attend (so a mason has to deputise for them) or too incompetent (so a mason has to tell them what to do before every meeting) or are just completely invisible to the rest of us (does Cllr Manning actually exist?), or - finally - are completely and utterly incompetent in any case ... must be stopped.

The mayor is ineffective and the cabinet is made up of complete lightweights (with the possible exception of Cllr Lewis, who doesn't breathe the same air as the rest of us anyway).

And this from a Tory voter.