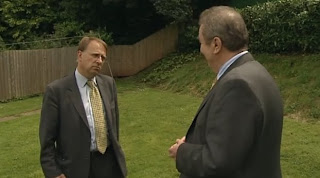 The Totnes Primary
Are Lib Dems foolish to interfere?

This is a screenshot from Newsnight on Tuesday, who ran a long feature on the Totnes selection for a candidate to replace Anthony Steen as the next Conservative MP there, featuring an interview between bay MP Adrian Sanders and editor Michael Crick.

Sanders was repeating much of what he said in his newspaper column the previous week - which I found equally surprising. What he said was that he urged Lib Dems to vote for Nick Bye as he believed Nick would be the easiest person for their candidate to beat at the next election.

Firstly, it is a high risk strategy for any MP to interefere in the business of neighbouring constituents and one that most MP's run a mile from. To be blunt, there are no votes in it.

Secondly, presumably if Mr Sanders believes that Nick Bye is an electoral liability he must think that Nick Bye will lose the next mayoral election if he fights it. As a Lib Dem therefore the last thing he would want would be for Mr Bye to be selected in Totnes and then not stand for Mayor next time in Torbay opening the way for someone new.

double bluff? Is he hoping that if he publicly urges Lib Dems to vote for Nick Bye then Tories might do the opposite in droves, depriving Nick of the nomination and forcing him to stay on as mayor?

A third and much more intruiging possibility is that Mr Sanders is hoping that Nick does get picked for Totnes, wins the seat and then has to resign the mayoralty - creating a juicy well-paid political job vacancy immediately after the next election, suitable for an unemployed local man with political experience to try and get elected into.

I wonder who could be up for that, then?

Either way trying to gerrymander in the internal politics of another constituency is a very high risk activity, it made the Lib Dems seem unusually petty and party political, something they usually go out of their way to avoid. But then personal ambition and what is good for the party have never been happy bedfellows with the Torbay Lib Dems.

He has earned his living from politics his whole life. He knows he will lose the seat next time and wants another job to go to, what else will he do? He couldn't run a whelk stall in the real world.

Absolute rubbish, having an lifelong interest in politics isn’t the same; he’s not lived in the real word and had a real job. Would you criticize Chloë Smith MP – Norfolk North victor for spending most of her working life in the political hot house .

The interesting thing about the Totnes selection is Nick Bye and Cllr Randall Johnson attacking the Lib Dem PPC Julian Brazil. Marcus has on this very blog has rightly defended Cllr Brazil from the ‘Alice in Wonderland’ nonsense of the Standards Board. ‘Humpty- Dumpty -“a word means anything I say it means”; thus bullying a word most people understand, becomes something the Standards say it means - ‘tone of voice or body language could constitute bullying ‘.

Our MP's own website confirms he worked in insurance when he left school for just a handful of years before working in and around Lib Dem politics, where he has been ever since.

There is nothing wrong with it if you support the concept of a political class of professional politicians who become experts at politicking but not much else.

The Prime Minister is a good case in point, having been in Westminster sine 1982. The European Parliament is even better example.

Personally I lament the coming of this phenomenon, one that is affecting Tories as much as any other party, what has George Osbourne done in the real world?

The snag is these people bring no common sense wisdom to decision making and as a result we have unwieldy laws with unintended and unfortunate consequences such as that unfortunate Englishman Gary McKinnon being sent to America to stand trial for a crime he committed on British soil under a badly drafted anti -terrorism law that gives Americans preference over sovereign territory.

MP's like Adrian Sanders prattle on about things which they know nothing and in the process invite the derision and mistrust that their profession has come to signify.

I’m sorry Adrian is the opposite of the ‘political class’ - the hapless career politician, with negligible skills, and no ideology or values, who simply see it as a good job. Adrian is a local boy who had to fight hard to become an MP in his own home. Yes he worked for Paddy Ashdown but he also worked for a charity, and local government organisation. I knew him before he was an MP and he is still the same regular guy.

Both Mr Anonymous' are part right and part wrong. Mr Sanders past career varies depending on where you read, but essentially by his own admission he has spent the vast majority of it in and around politics. As far as I can find he has never worked for a charity.

His own Wikipedia entry says "He went to primary schools in Paignton and Torquay then Torquay Boys' Grammar School. He worked briefly in a timber yard, then in the insurance industry for seven years, and then had a short spell of unemployment before finding work in the political arena."

The BBC says: "Adrian Sanders served on Torbay Council and worked in insurance, as a policy officer for a number of charities and voluntary organisations and as a political adviser to Paddy Ashdown, before being elected to Parliament in 1997."

His Myspace entry says "I joined the Liberal Party in 1979 and in 1985 was elected Vice President of the National League of Young Liberals.

In 1984 I stood successfully to Torbay Council representing the old Blatchcombe ward, a third of which will return to the Torbay constituency at the next election, under the Boundary Review.

Between 1992 and 1993 I worked in the office of Paddy Ashdown MP where I was primarily responsible for organising Paddy's 'Beyond Westminster' Tour, in which Paddy was the first leader of a national party to leave Westminster to live and work in various different communities across Britain

On completion of the tour I worked as the Policy Officer of the National Council for Voluntary Organisations (1993-94) and then the Southern Association of Voluntary Action Groups for Europe, advising voluntary organisations and charities on how to gain access to funds from Europe for training and employment projects."

Southern Association of Voluntary Action Groups for Europe, according to it's own website is an infrastructure organisation covering the south of England; an area incorporating fifteen counties and thirteen million people. It is funded largely through the European Union and the Department of Communities and Local Government. It is a not-for ptofit limited company, it is not a charity.

Sorry there is an error in my post, lets get this right. The NCVO and SAVAGE are registered charities. Adrian says he worked for them in 1993/4 as a policy officer. I will leave you to judge whether mr anonymous 1 is right when he claims this is 'earning his living from politics' or not.

It looks as if the voters of Totnes 'interfered' with Nick Bye's longstanding wish to be an MP. He wanted to be judged on his record and he has, coming third behind two hitherto largely unknown candidates.

Previously you asserted that Bye was an 'assset' and that there is no hostility to him outside a small coterie of Lib Dems. The evidence from Totnes, including as it does 40% of the area covered by Torbay Council, states that the mayor is a huge liability. Will you accept the view of the electorate now ?

Finally, having previously backed Bye to the hilt, where are you now in his hour of political need ? Where are the statements of public support from you now ? Instead, you run a silly 'Photoshop' story.